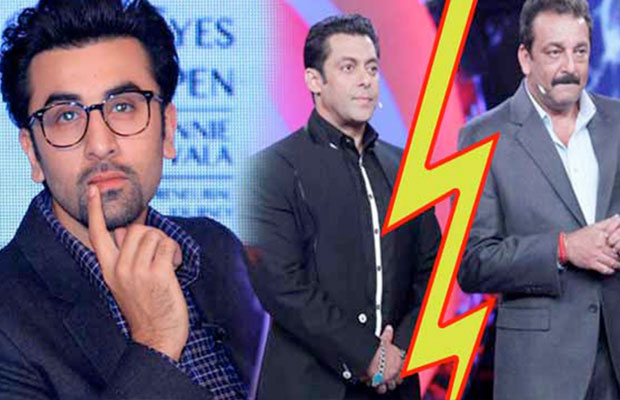 [tps_footer]We are all aware about the cold war brewing between actors Salman Khan and Sanjay Dutt. However, the altercation has grown after Salman recently objected to actor Ranbir Kapoor playing the role of Sanjay Dutt in Raju Hirani’s biopic. There has been serious tension rising between the two actors and mutual friends of the two are really worried about it.

A common friend of the two said: “They are very similar individuals and therefore get hurt by the same things. We all thought the cold war would calm down after some time. But neither Bhai (Salman) nor Baba (Sanjay) is willing to budge. Basically, Bhai wants anyone but Ranbir to play Sanjay. But Baba adores Ranbir and won’t change his mind,”

For those living under a rock, Salman’s disinclination towards everything involving the Saawariya star can be traced to his relationship with Salman’s ex-flame (now Ranbir’s ex-girlfriend also) actress Katrina Kaif. Things between the two actors are so repulsive that they do not even prefer attending the same public events.

A close friend of the actors says: If Salman comes to know that Sanjay is attending an event he refuses to attend, and vice versa.”
Common friends of the two actors are trying hard to settle issues between them.