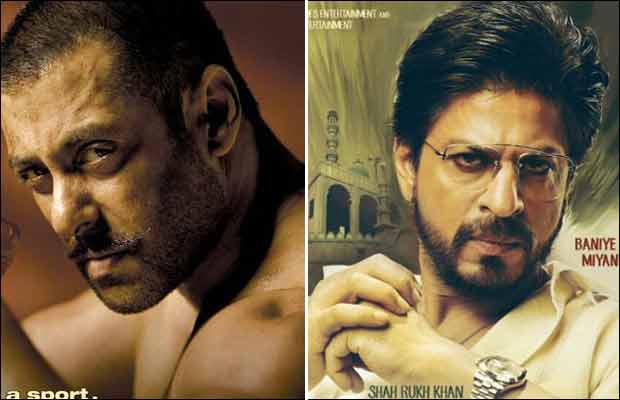 [tps_footer]For all those who are expecting a big Shah Rukh Khan and Salman Khan clash in 2016 might have to breathe a sad sigh. The two superstars of the Bollywood industry Shah Rukh and Salman are coming up with their ambitious projects ‘Raees’ and ‘Sultan’ respectively in 2016. Reports making rounds suggested that both the films might release on the same date causing a big box office hurdle and clash. But seems like, there is a change in plan.

Speculations making rounds suggest that there might be no clash between SRK and Salman with their films ‘Raees’ and ‘Sultan’. The two much in limelight films were expected to hit the screens on Eid 2016, but now speculations say that both the films will not share a common release date.

The two films ‘Raees’ and ‘Sultan’ are already creating rounds with the idea of clashing on the box office next year, but Shah Rukh Khan and Salman Khan seem to be having a change of mind there. Reports now suggest that the release dates of the two films will be reworked and will be decided in a while.

Shah Rukh Khan’s ‘Raees’ will see the King Khan in the character of a bootlegger; the first look has already generated loads of enthusiasm amongst the masses. Coming to Salman Khan’s ‘Sultan’, the film is much in news as Salman has already started shooting for the same moreover, the superstar has also achieved a unique wrestler body type for the movie.

Currently, both the actors are on good terms with each other and the same is evident with their messages on their social networking accounts. On the work front, Shah Rukh Khan is gearing up for the release of his upcoming film ‘Dilwale’ directed by Rohit Shetty whereas Salman Khan is shooting for the film ‘Sultan’.[/tps_footer]