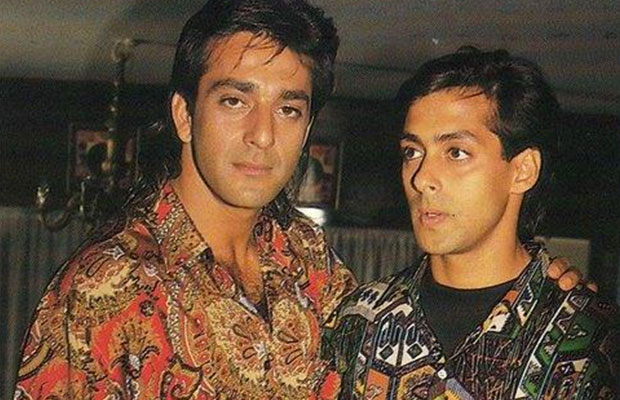 Saajan rotates around Aman played by Sanjay Dutt, Akash Verma played by Salman Khan, & Pooja Saxena played by Madhuri Dixit. The movie takes you through a beautiful journey of friendship between Orphan, poor and handicapped Aman and the rich wealthy Akash.

The movie also has given Bollywood one of the most iconic friendships, of Salman Khan and Sanjay Dutt & the career graph of both the actors had changed after this cult movie.

The chemistry between the two was the talking point and set a great example for others.

The friendship of Sanjay Dutt & Salman Khan flourished after the movie, & still the friendship between the two is talked about.

Sanjay Dutt was honored with the best actor award for his strong performance in the movie along with Madhuri Dixit bagging the best actress award, and Salman Khan had mesmerized everyone with his charm in the movie.

‘Saajan’ was also the highest grossing film of the year shattering all box office records of previous movies, & has also established itself as the 5th highest grosser of the 90’s decade.

The film still has a cult following because of power packed performances by Sanjay Dutt, Salman Khan, and Madhuri Dixit and the music of the film which was given by 90s musical genius Nadeem -Shravan.

The song’s of ‘Saajan’ had created a storm then, and still, has its effect on today’s generation because of the mellifluous music and excellent play back singing by all singers.

The movie’s dialogue, screen play, & the story were also very well appreciated. Saajan will very soon complete it 25 years & there are chances we can get a sequel to the cult hit soon!