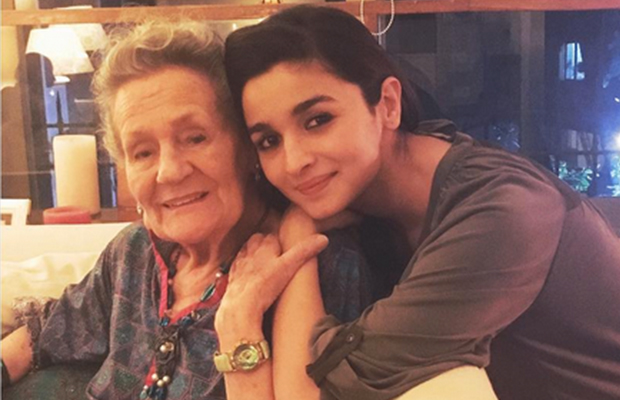 Actress Alia Bhatt, who is super active and super busy promoting her upcoming film Badrinath ki Dulhania, sure knows how to take out some time for the family. After a long time, her Instagram feed sees a non BDK related post.

No, this time Alia posts a picture with her grandmother Gertude Hoelzer, whose 88th birthday she celebrated very lovingly.

With arms wrapped around the birthday lady, and gorgeous smiles on both faces, Alia doesn’t really need to caption the picture. But she does! And it cannot be any sweeter! “My beautiful grandmother turns 88! She sang a song on her birthday whilst playing the mouth organ! Now I know where I get my musical inclinations from! Her life is so inspiring! She’s one of the most unique and special people I’ve had the privilege of knowing and loving! P.S – After taking this photograph she insisted that her hair didn’t look upto to mark!”

Speaking of Badrinath ki Dulhania, Alia cannot be more excited. Its her third film with co-actor and good friend Varun Dhawan after Student of the Year (2012) and Humpty Sharma ki Dulhania (2014).
We have absolutely no doubts regarding their sizzling on screen chemistry.This film helmed by director Shashank Khaitan is out and ready to hit the silver screen on March 10.