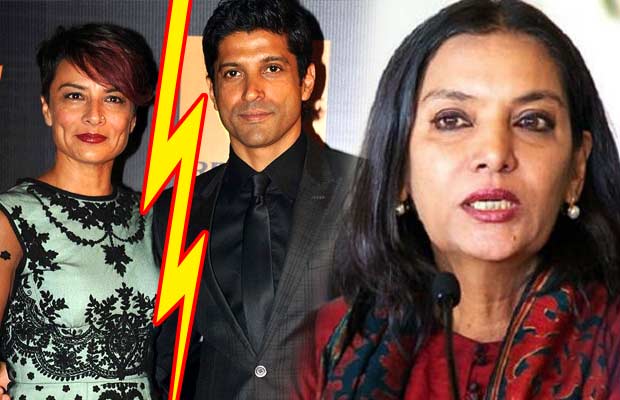 [tps_footer]Well we all love Farhan Akhtar and his infectious smile. But what recently wiped out our smile was the separation between Farhan Akhtar and Adhuna. Well, while all the ladies can be happy that Farhan is single again, but on the other hand it is quite the shock to the family because they separated in January after being married for 16 long years!

Finally, Farhan’s mother  Shabana Azmi broke her silence about this tragic incident with her usual composed nature of course. In an exclusive interview with Filmfare, she said :”Our family reacted with a lot of pain because I really love Adhuna and so does the family. What has been a matter of huge relief is that both of them have done it with so much dignity and that they continue to enjoy cordial relations with each other.”

She also added, “They didn’t throw muck at each other, they are responsible towards not only the children but to each other as well. And in no way has it changed my equation with Adhuna or Javed’s (Akhtar) relationship with her.”

When quizzed about Adhuna,  :”I respect her as a person of integrity and credit her for bringing a revolution in Hindi cinema where hairstyling is concerned. Earlier, there were only two hairstyles. If the hero had a fringe, he was village bumpkin. If he slicked his hair back, he was an urban sophisticate. Adhuna sensitised our actors to how integral hair is in defining a character.”

Well, we all know that both Farhan and Adhuna are extremely gracious and are not the mud slinging kind. They both have their differences yet have managed to maintain the decorum and not go bashing out at each other. We only hope things fall in the place for the two![/tps_footer]