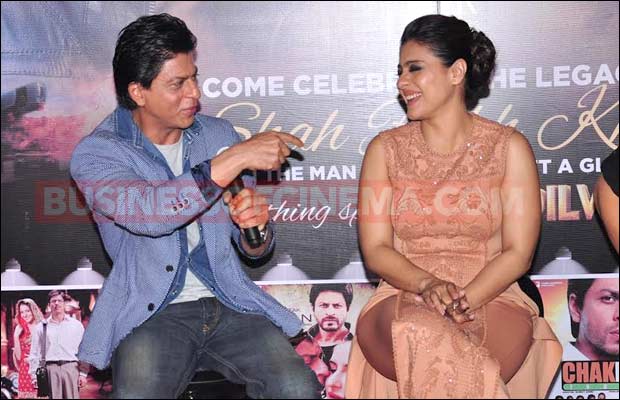 [tps_footer]Shah Rukh Khan is undoubtedly the most romantic star of the Bollywood industry. The superstar who still makes the girls drool with his charm has recently confessed on doing romantic scenes with best friend and co actor Kajol. SRK who is on cloud nine with his just released film ‘Dilwale’ is receiving loads of compliments for his on screen chemistry with Kajol. The actor has always confessed openly that his rapport with Kajol is special and the two stars are known for their best friendship.

We all know Shah Rukh Khan is very active on the micro blogging site Twitter, the superstar always makes it a point to connect with his fans via the social platform. King Khan like all other stars was on a #AskSRK spree where fans can ask him any questions they want. One of the questions asked to Shah Rukh Khan was to comment on the most awkward moment while shooting with Kajol.

Shah Rukh Khan who is witty as always commented frankly saying, “We r very clumsy together. Many times during intense romantic scenes we bump our heads.” 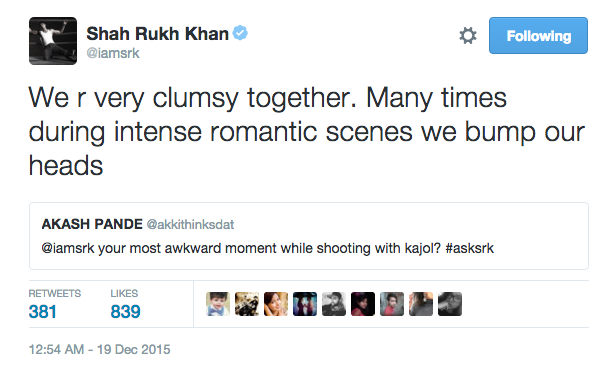 King Khan’s reply to the question was top notch by all means. Shah Rukh Khan and Kajol recently shared screen space for Rohit Shetty’s much in limelight film ‘Dilwale’. The movie gained all the headlines for the reunion of SRK and Kajol on the silver screen.  ‘Dilwale’ also stars actors Varun Dhawan and Kriti Sanon in main leads. The film ‘Dilwale’ is a combination of action, comedy and romance.

The Shah Rukh Khan starrer film nonetheless received tough competition from Sanjay Leela Bhansali’s historic drama ‘Bajirao Mastani’.  Well, even if Shah Rukh and Kajol bump their heads into each other, we can undoubtedly adore them on the screen![/tps_footer]