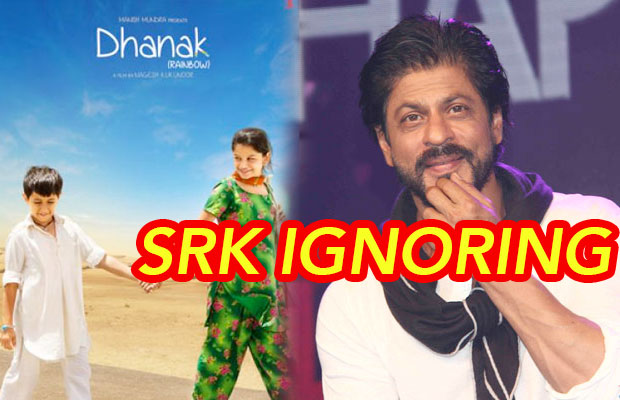 [tps_footer]Nagesh Kukunoor’s ‘Dhanak’ has received loads of praises. The film depicts the journey of two children who are travelling across Rajasthan to meet Shah Rukh Khan. The film which is a simple story was adored by the masses for its innocent and meaningful plot. Many complimented the film for its brilliant execution. Moreover, the child artists in the movie are also on everybody’s minds. But SRK was nowhere to be seen in the film.

‘Dhanak’ revolves around the stardom of superstar Shah Rukh Khan. The film which has garnered all the positive critical acclaim has not received any word from the star SRK himself. Many expected that King Khan would pass his thought on the film, but nothing of that sort happened.

Reports state that things are not going too well between SRK and filmmaker Nagesh Kukunoor. Further, speculations state that the makers of the film ‘Dhanak’ tried to get SRK on board for a guest appearance, but the star was unreachable by all means. Moreover, it is said that Shah Rukh Khan did not even revert to their calls and messages.

The scenario of this state is strange as the Dilwale actor is quite humble when it comes to appreciating credible films. The actor has also made guest appearances in many films without judging the movie. The superstar who is quite active on the social networking sites has not even acknowledged the film in any way.

Well, the reason for the same is not yet known. On the work front, SRK is gearing up for Gauri Shinde’s next and ‘Raees’.[/tps_footer]