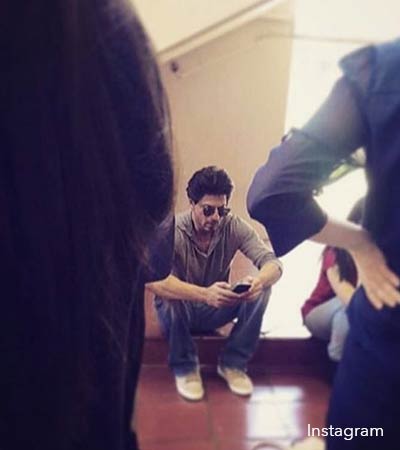 [tps_footer]A few days ago Shah Rukh Khan took a trip to the U.S. with his kids Aryan and Suhana. Later, he was accompanied by Gauri and AbRam. Well, the actor was even detained at the Los Angeles airport which had varied reactions across the country.

Recently, SRK and Gauri dropped Aryan at the University of Southern California. Aryan will complete his graduation in this institute. Well, when King Khan and Gauri attended the orientation programme at the university, they came across many fans and admirers. The lucky fans even got to snap with the stars and later uploaded the pics on social media. These fans even clicked pictures with Aryan and Gauri. Well, while scrolling through these pics, we found one photo in which the Dilwale actor is sitting and is looking into his cell phone. Seems like SRK is busy catching Pokemon while waiting for the orientation to begin at the University.

It’s not a hidden fact that the Baadshah is a Pokemon Go addict. Even at LA airport,  during his detention, he used it as an opportunity to catch some good Pokemon. Also, a few days ago he even posted on Instagram how inadequate, unattractive & lonely he is feeling as he couldn’t catch a single Pokemon from last 45 minutes. Well, looks like it will take a lot of time for Pokemon fever to slow down on SRK.

On the professional front, the actor will soon start shooting for Imtiaz Ali’s next opposite Anushka Sharma. The film is tentatively titled as The Ring. Also, Anushka is playing a Gujarati chori in the film, whereas SRK  a Punjabi tour guide. His film Dear Zindagi along with Alia Bhatt will release on November 25. Apparently, the trailer of his much-awaited film Raees will also release in November. The film is releasing on January 26, 2017. It will clash with Hrithik Roshan’s Kaabil.