Not only Shah Rukh Khan starrer Ahmaq, even Priyanka Chopra’s unreleased film will also be screened at the Jio Mami 2016. Yesterday, we told you that SRK’s mini-series-turned-film directed by Mani Kaul will be shown at the Mumbai film fest. Now, Priyanka’s Marathi film, Ventilator will also be screened there.

This is Priyanka’s first Marathi film produced under her banner Purple Pebble Picture. The film is directed by Rajesh Mapuskar. The film stars Ashutosh Gowariker in the lead role. This will be Gowariker’s comeback on the silver screen after a long sabbatical. The teasers of the film are already out and look really exciting. PeeCee is supposedly doing a dance number in Ventilator.

SRK tweets, ‘‘Ahmaq’ being screened @Mumbaifilmfest so please register with http://www.bookmyshow.com/MAMI my first foray into cinema.’

The actress is currently in USA shooting for the second season of her English television series, Quantico. On the other hand, SRK is in Budapest, along with Anushka Sharma shooting for Imtiaz Ali’s tentatively titled, The Ring.

CHECK OUT THEIR TWEETS BELOW: 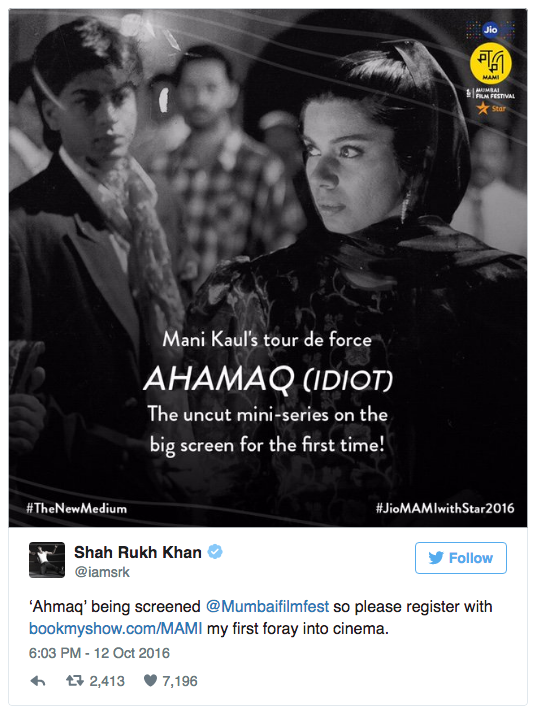