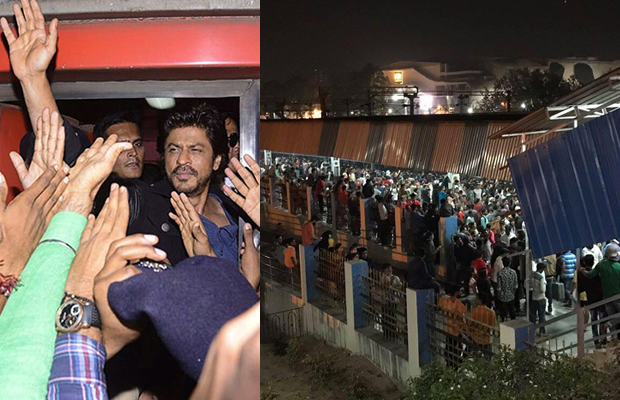 Bollywood superstar Shah Rukh Khan is leaving no stone unturned for the promotions of his upcoming film, Raees.

The actor yesterday went onboard the August Kranti Rajdhani Express from Mumbai for the yet another promotional campaign. Thousands of fans gathered at the station yesterday as Shah Rukh Khan boarded the train from Mumbai.

As per media reports, when the train arrived at Vadodara station at around 10:30 PM on platform number 6, SRK’s fans gathered in large numbers to catch a glimpse of the actor. The train halted at the station for almost 10 minutes and reportedly, the crowd went berserk. Reportedly, fans started banging the window panes of the train and started falling on each other only to catch a glimpse of Shah Rukh Khan.

Reports also suggest that one person died and two policemen injured during the stampede. Sorts of reports also suggest that the person felt suffocated during the stampede at the railway station. And after which he suffered a heart attack. The deceased is identified as Farid Khan Pathan, a resident of Vadodara. He also happens to be the uncle of a female journalist who was traveling in the same train.

One of the colleagues who was traveling in the same train has revealed that Shah Rukh Khan was quite in a shock after the tragic incident. He immediately extended help to the family. The female journalist was quite excited as her uncle came down to see her at the station but things turned out to be sad.

Shah Rukh Khan who reached Hazrat Nizamuddin railway station in Delhi commented about the unfortunate incident and said, “We started the journey thinking we all will travel, spend time with each other when one of your own loses someone in a trip like this, it saddens us all.

One of our colleagues was traveling with us. Her uncle came down to see her at Baroda. He suffered from a cardiac arrest. It was really unfortunate. We have some of our people with the family members there. Hopefully God will bless her soon.”

He further added, “On behalf of everyone, our prayers and blessings with the whole family. She has reached there. I just spoke to her. I think the burial is in an hour or half hour.”

Also Watch Video: Salman Khan And Shah Rukh Khan’s Reply On What Would They Have Done If They Were BB10 Contestants