The whole country was in a shock after PM Narendra Modi took a massive step to ban the Rs 500 and Rs 1,000 notes. All the currency with the denominations of 500 and 1000 has been banned, in a bid to stamp out black money, fake notes, and corruption. Soon after the ban was imposed, the Twitterati reacted with great humor and tongue-n-cheek manner. Many tweeted in support of the ban while some opposed PM Narendra Modi‘s action.

Many Bollywood stars including Anushka Sharma, Amitabh Bachchan, Bipasha Basu and others took to twitter handle to praise Modi’s step over the ban. The stars appreciated Modi’s move to wipe out black money and corruption from the country.

Bollywood superstar Shah Rukh Khan also took to twitter to express his view on the huge step taken by the Prime Minister. SRK tweeted, “Farsighted. Extremely smart. And not politically motivated. Will bring such a positive change for Indian economy. Great move @narendramodi” 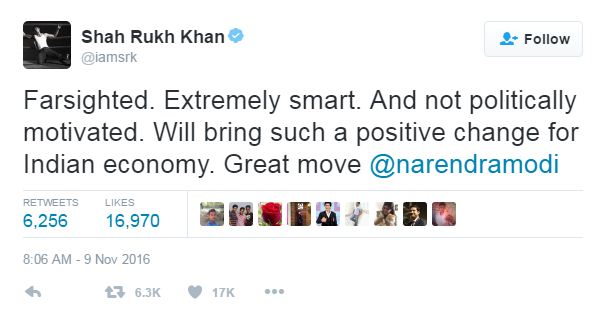 Check out what other Bollywood stars tweeted: CLICK NEXT