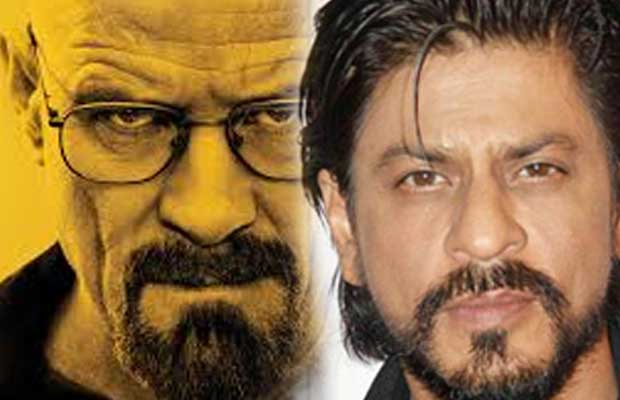 [tps_footer]Shah Rukh Khan who is tied with his lined up projects after ‘Dilwale’ has already given a hint for his yet to commence plan. The King Khan who is always prepared to give a unique subject to his fans has now disclosed something unknown for his future project. Superstar Shah Rukh Khan as we all know is looking forward for a blockbuster with the film ‘Dilwale’, however, he has already confessed on remaking a Hollywood series into a Bollywood movie.

Fans and reports are abuzz with the fact that Shah Rukh is interested in the remake of the American series Breaking Bad into a Bollywood film. The actor has suggested that he doesn’t want to make it into a Hindi television series, but instead wants to make a film out of it. Shah Rukh Khan thought of converting the series into a film and not a TV drama because he opined that the subject of the series Breaking Bad might not be accepted in a TV series, but would be more acceptable in a film format.

Commenting on the same lines, Shah Rukh opened up on this idea saying, “I want to make it into a movie. As a series, it is too evolved to come on Indian television. The Indian audience won’t be accepting of meth, drugs and the mafia. But the story of a man who is going to die and takes a chance to save his family is a good premise for a feature film. I have asked some people who have said that they would get me the rights. I am at that age when it will be interesting to take up such a role.”

Well, nailing his witty statement to the core, when SRK was asked whether he would play the central character of Walter White, the amazing star replied, “Great films don’t work without me, darling!”

The social media is already abuzz with Shah Rukh Khan’s remake idea, many fans are nonetheless happy about this development. Now when this project finally takes off is yet to be seen.

SRK is currently gearing up for his film ‘Dilwale’. The much awaited film stars actors Kajol, Varun Dhawan and Kriti Sanon in main leads apart from Shah Rukh Khan. Directed by Rohit Shetty, ‘Dilwale’ is all set to hit the screens on December 18th, 2015.