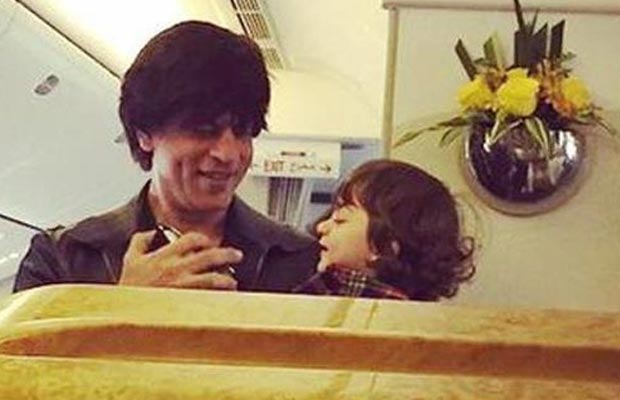 [tps_footer]Shah Rukh Khan is busy with the promotions of his upcoming film ‘Dilwale’. The super star who is highly busy with his back to back schedules is nonetheless also spending time with his little toddler AbRam. As we all know the cast of the film ‘Dilwale’ is on a promotional spree in London. Stars Kajol, Varun Dhawan and Kriti Sanon are also on the promotional tour with SRK. Well, seems like new member joining the team of ‘Dilwale’ is AbRam.

Shah Rukh Khan has been too vocal about his little bundle of joy AbRam. The super star always keeps on posting pictures and messages for his little one. Also the social media is gaga over this little cute toddler. Pictures of Abram are all over the place and the fans can’t stop drooling over the same. With identical looks of SRK, AbRam is already crowded as the most popular star kid.

King Khan who is very much active on the social networking sites took to the micro blogging site Twitter and tweeted, “London as always beautiful. The people here even more loving than before if that’s possible.Highlite of the day got to be with my lil AbRam.”

Well, all things apart seems like only AbRam has the key to Shah Rukh Khan’s happiness. The actor is all head over heels for this little kid and doesn’t stop showering love on him. The mind blowing actor is currently leaving no space unexplored for the promotions of his upcoming film ‘Dilwale’. Directed by Rohit Shetty, ‘Dilwale’ will feature actors Kajol, Varun Dhawan and Kriti Sanon in main leads apart from SRK.

The much awaited movie is all set to hit the theaters on December 18th, 2015.[/tps_footer]