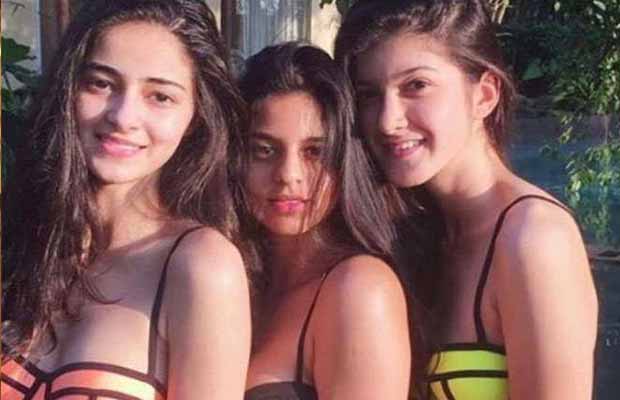 These days most of the star kids are leaving no stone unturned for their blockbuster debut in Bollywood. Most of them are Sridevi’s daughter Jhanvi Kapoor and Saif Ali Khan’s daughter Sara Ali Khan. But among them, one name which is so popular is Shah Rukh Khan’s daughter, Suhana Khan. Although she is trying to build up an image as a star kid, she is often seen not attending Bollywood parties. She is instead seen partying with her girl gang, Shanaya Kapoor (Sanjay Kapoor’s daughter) and Ananya Pandey (Chunkey Pandey’s daughter).

The star kid, who has recently turned 17, had been captured partying and enjoying her friends. She was captured wearing a bikini. The picture of the trio was uploaded by a fan club captioning it as “#friendship goals”.

It is believed that Suhana and Shanaya have been friends since childhood and that Sanjay Kapoor’s wife, Maheep had also posted a picture of the duo on Suhana’s 17 birthday to wish her.

It is very well known that Chunkey Pandey’s Ananya Pandey would be launched by actor Salman Khan in Bollywood very soon, but much isn’t said the same about Suhana and Shanaya. They are trying to build up their star image but there is no news regarding them been launched into Bollywood.

We pray that this ever-lasting bond of friendship among the three grows more and more, and hope that their professional life does not ruin their friendship.

Hope this friendship remains as an unbreakable bond!!