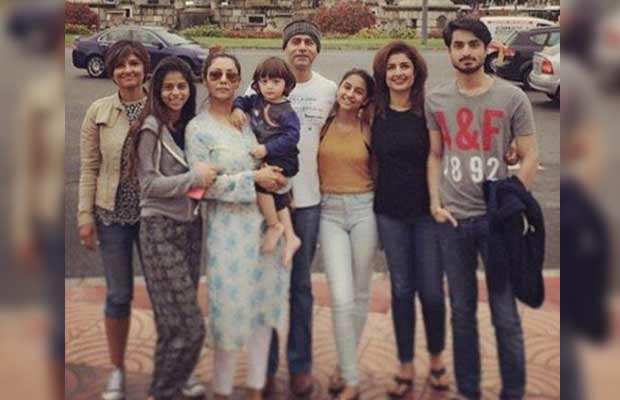 [tps_footer]Shah Rukh Khan is busy with his never ending professional commitments; however wife Gauri Khan leaves no stone unturned to make it up to the kids. The Khan family sans Shah Rukh Khan was recently spotted at a secret holiday destination with other friends.

The picture made way to the microblogging site Twitter. The picture sees Gauri Khan, Suhana, and AbRam in a holiday mode with other friends. SRK’s three children Aryan, Suhana and AbRam are already a favorite of the lenses. The three kids are a rage on the social networking sites. Recently, toddler AbRam’s adorable video wherein he is trying to say a few words made waves on the social networking sites. Likewise, King Khan’s darling daughter Suhana has already earned the tag of being a fashion icon.

Suhana and AbRam’s beach picture made everyone drool by all means. The holiday picture, however, did not see Aryan.  The leaked picture consisted of a smiling Suhana and Gauri Khan holding on to the little bundle of joy AbRam.

Well, must say good looks and charm are an inevitable part of the Khan clan. On the other hand, Shah Rukh Khan is busy with the release of his film ‘Fan’; the actor will be seen in a double role in the movie. ‘Fan’ is all set to hit the screens on 15th April 2016. Apart from the stated, SRK is also tied up with two other films ‘Raees’ and Gauri Shinde’s next.[/tps_footer]