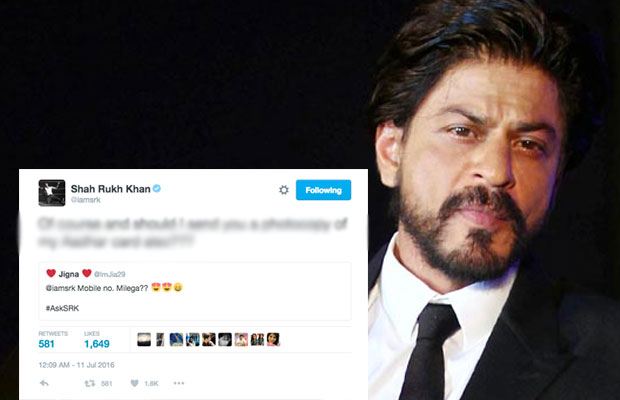 [tps_footer]Shah Rukh Khan is the king of wittiness. The mind blowing superstar who is always giving smart replies is also humor filled. SRK was last seen in the film ‘Fan’ and the actor is now busy with back to back shooting schedules for his upcoming projects. The amazing star is extremely active on his social networking accounts. King Khan makes sure he interacts with his fans on a regular basis.

Like every time, SRK started an Ask Srk question answer round on the micro blogging site Twitter. The stated enables all the users to ask one on one questions to Shah Rukh Khan. One of the users asked the Dilwale actor for his mobile number and our witty actor replied in the most epic manner.

Just when the fan asked SRK for his number, this is what he replied, “Of course and should I send you a photocopy of my Aadhar card also???” 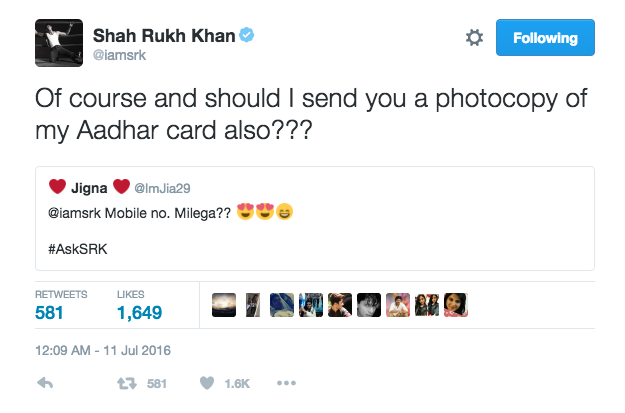 Well, only Shah Rukh Khan can think of something so funny when he is interacting with fans. On the work front, King Khan is roped in for Anand L Rai’s next and Gauri Shinde’s next. The actor will explore his versatility with Imtiaz Ali’s upcoming project.

Apart from the stated, Shah Rukh Khan will be seen in the role of a bootlegger in the film ‘Raees’.[/tps_footer]