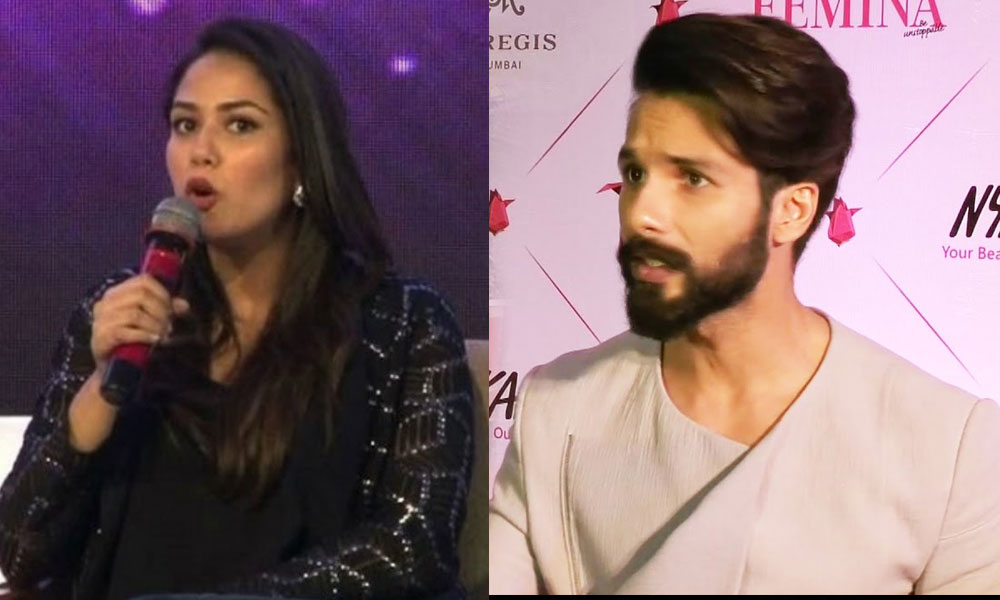 Recently, during International Women’s Day, Bollywood actor Shahid Kapoor’s wife Mira Rajput clarified her choice of being a homemaker on Women’s Day but ended up making a controversial remark which had hurt many working women’s. Mira was also criticized for comparing babies to a puppy. Many working women’s and journalists wrote open letters to Mira over her puppy remark.

At the recent Nykaa Femina Beauty Awards, Shahid Kapoor was asked to comment on the uproar and the criticism his wife Mira faced after the controversial remark:

“First of all I think Mira started the conversation by saying that ‘these are my personal comments’. I don’t think she made a direct comment on anybody or any category of women so to say. I think she was talking about a very personal stand point. I think Mira is speaking for a section of women who really aren’t being represented. There are times when those women feel that they should not be celebrated. By that I mean women who might not be doing a job, women who might choose to be at home, have a baby, take care of that baby and consider that something important enough to do at a certain stage in your life. A different stage of life you might choose to be something else.”

He further said, “I took five months off when I was having Misha because I felt it was important for me to be with my wife and my child. So, that’s a choice you make out of a certain sense of independence. And I think there are very few people who are showing any kind of appreciation towards these women. I don’t think what a mother does to her child is something that should not be appreciated. They should feel empowered and self-assured about the fact that they are extremely important and what they do is as important as any other job.”

He continued saying, “I personally feel that I might be the one who goes to work between me and Mira as husband and wife but what she is doing for Misha is far more important, far more relevant. I really wish I could but between the two of us one has to go to work and I happen to be that person. So I think she was speaking from a very positive space. I do understand that people have a strong point of view and people get hurt about things but I think we are in a time where everybody is getting hurt about everything so I honestly don’t feel there is any sense in trying to keep everyone happy. We are also in a time where anybody who is important or being given importance says something, a lot of people want to gain importance by saying something against them. So we just live in that kind of a time. I personally went through her entire interview and I in fact even retweeted it because I felt what she is saying is really relevant. All she is saying is that women should have the right to choose.”