Do you remember Vikas Bahl‘s ‘Shaandaar’ and Gulaabo Sanah Kapoor?  Yes, we are talking about Shahid Kapoor‘s sister who was last seen in the movie with her brother and father and later disappeared.

The ‘Haider’ star Shahid Kapoor had shared a cute picture of him with sister Sanah Kapoor.He captioned it as: “Feeling he sister love today.” However the reason behind this sudden love is still unknown. In the picture, we can see Shahid and Sanah chilling at a beautiful location. Both of them are looking adorable in their black overcoats. And it seems to be a throwback picture from their shoot or a vacation. 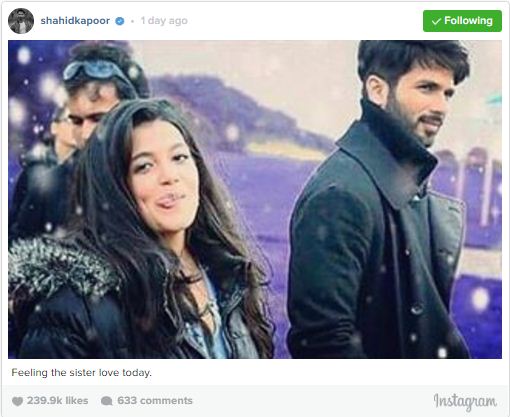 On the Bollywood front, Shahid is shooting for Sanjay Leela Bhansali’s Padmavati. Sanah has not signed any film yet but had mentioned that she will take up a film in the first few months of 2017. There hasn’t been any announcement about it.

This brother-sister picture will surely set your major sibling goals!