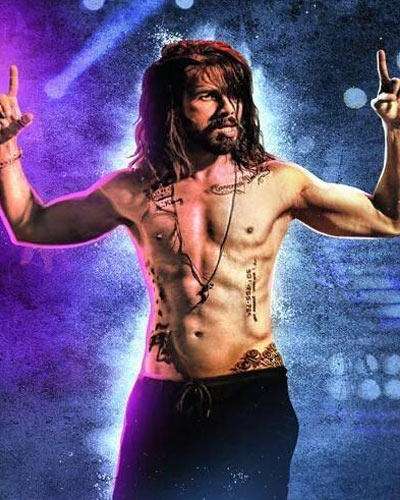 tps_footer]After being labeled as the boy next door of the industry, Shahid Kapoor lately has transformed to no ends. The actor has diverted his genre by taking up challenging roles. The handsome hunk who is always methodical in his characters has now made a mark with his choice of films. Starting from ‘Haider’ there is no stopping for this mind blowing star.

Yet again Shahid Kapoor is ready to surprise and shock the audience. Shahid will soon be seen in Abhishek Chaubey’s ‘Udta Punjab’. The film is sensitive to the core as it deals with the menace of drug addiction in Punjab. The movie is much in the limelight since its inception and finally, the first look and the short introductory glimpse of the film has made its way to the masses. Once again Shahid Kapoor has proved that when it comes to getting into the shoes of his characters for any film he leaves no stone unturned.

The latest look of Shahid from the film ‘Udta Punjab’ is finally unveiled. Looking all ferocious and rockstar like, Sasha is making us drool with his well-toned abs. The actor is nailing his character of Tommy Singh to the core. With long tresses and inked body, Shahid is surely going to be the next trend setter for all guys.

Well, the film is much in the news not only for its concept and Shahid but also for its other stars. ‘Udta Punjab’ also features Alia Bhatt, Kareena Kapoor Khan and Diljit Dosanjh in pivotal roles. The much-awaited trailer of the film will be unveiled on 16th April 2016. The poster of the intriguing movie is high on life and is already grabbing eyeballs.