Actors and actresses are not allowed human error or lack of knowledge, especially if they are going to make their opinions and judgments public. Recently, actress Shilpa Shetty became the latest victim of trolling on Twitter.

Recently there were reports of books like the Harry Potter series and the Lord of the Rings series being included in the school curriculum in the English Literature syllabus for junior and middle school students of the ICSE boards, starting from 2017-18.

When the Dhadkan actress was asked about her views on it by a leading newspaper, she said, “I think having books like ‘Lord of the Rings’ and ‘Harry Potter’ as part of the syllabus is a great move because it cultivates imagination and creativity at a young age. I thinks books like Little Women would also encourage respect towards women at a young age. Even ‘Animal Farm’ should be included as it will teach the little ones to love and care for animals.”

The 41 years-old actress and mother misinterpreted the famous Animal Farm written by George Orwell, which actually traces the Russian Revolution of 1917 and the Stalinist era of the Soviet Union, as an animal welfare book. The animals being used in the novel are only on a metaphoric level. It talks about one of the darkest time in human history and has nothing to do with how to treat animals and most certainly does not teach little ones to love and care for animals.

This gave a chance for the all the trollers to ditch Monday blues and have a blast! #ShilpaShettyReviews is trending on Twitter and most of the tweets are hilarious!! 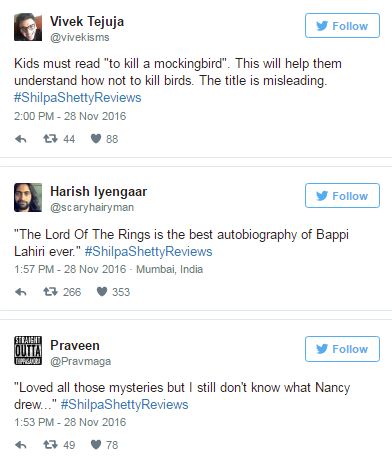 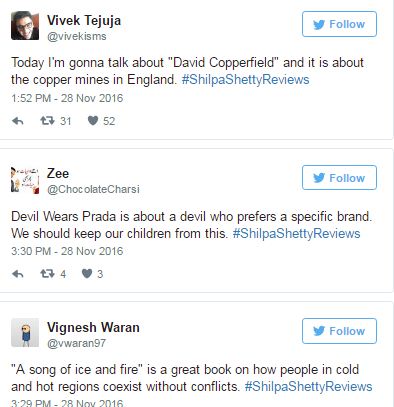