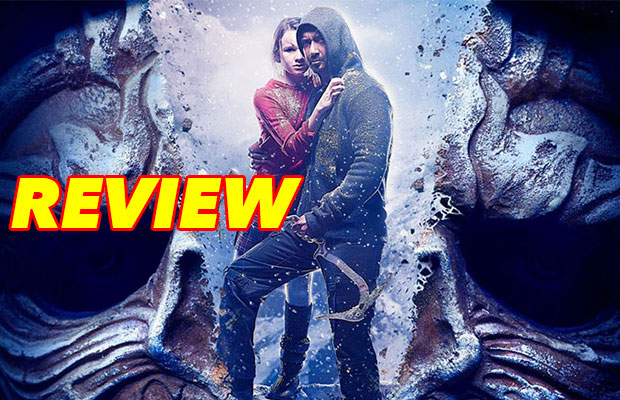 Ajay Devgn takes on the role of director in this ambitious thriller. He also plays the title part of Shivaay, a mountain man who is more skillful going up and down a mountain than he is dealing with real people. The Shiv-worshipping man runs a trekking business. On one such trip he falls in love with Bulgarian Olga (Erika Kaar) who has been living in India for five years, hence proficient in Hindi. Love results in a baby – one that Olga does not want but Shivaay does. He becomes single parent to Gaura who he raises to be as fearless as himself.

When she turns eight, Gaura (Abigail Eames) discovers the truth about her mother, which results in the father and daughter traveling to Bulgaria in search of Olga. The visit proves to be a turning point in their lives. On day one Shivaay rescues a child from a pedophile. This puts him in the crosshairs of the criminal ring that is dealing with child trafficking. Next on their radar is Gaura. Shivaay becomes a man enraged as he chases after Gaura before it’s too late.

If you have seen Liam Neeson starring Hollywood film, Taken, you will recognize this plot line. But whereas Neeson played a former CIA agent who goes after the crime ring in order to rescue his daughter, Devgn is a small town mountain climber who bizarrely becomes a lethal killer with some admirable fighting moves. The action scenes, whether the rescue during a landslide or the car chases, are the highlights of the film. The sloppily threaded story and myriad cardboard characters are either irritating digressions or accidentally comical.

The two female foreign actors – Erika Kaar and Abigail Eames do well, the first with her Hindi diction and the latter as the mute child who endures great terror at a young age. She is the soul of the film. In contrast, the Russian mafia and Bulgarian police and caricatures. Sayyeshaa does little as Anushka, an employee of the Indian Embassy, except reminisce fondly about her own father (Girish Karnad). Vir Das shows up to as a hacker who is also wooing Anushka.

At just under three hours, Shivaay is testing, because of the flabby screenplay (Sandeep Srivastava), overuse of songs and a story that’s impossible to swallow.