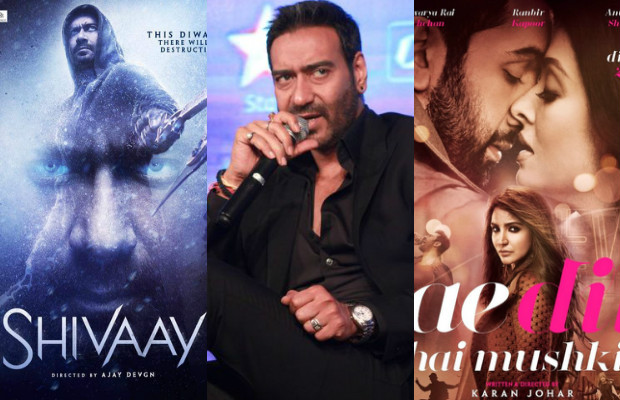 Actor-filmmaker Ajay Devgn’s Shivaay is just a fortnight away from the release and it is one of the most awaited films of 2016. The action-thriller has surely made all the fans curious and even the action sequences shown in the film are much appreciated by everyone. Ajay’s dream project is all set to lock horns with Karan Johar’s Ae Dil Hai Mushkil which is also releasing on Diwali 2016. Going by its trailer and songs, both the films look promising and there’s a lot of cutthroat competition between both the films. These two films look huge and their trailer shows both the films have an emotional quotient in it.

The promotions of Shivaay and Ae Dil Hai Mushkil are going steady and the fans are going gaga for both the films. However, the current scenario shows that Shivaay is leading ahead in the race as Ae Dil Hai Mushkil is having odds in its way due to the involvement of Pakistani actor Fawad Khan in it. Ae Dil Hai Mushkil also stars Ranbir Kapoor, Anushka Sharma and Aishwarya Rai Bachchan in the key roles. On the other hand, Shivaay stars Ajay Devgn, Sayyeshaa Saigal, Erika Kaar and Vir Das in pivotal roles.

Well, we wish both the films do well at the box office. What do you think about it? Let us know with your comments below.