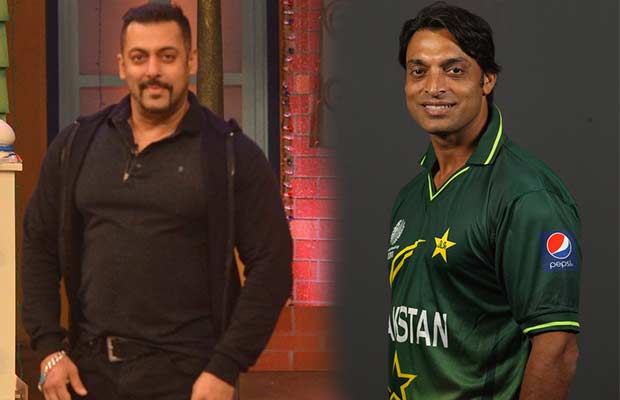 [tps_footer]Biopics have been a sure shot way to success in Bollywood. From ‘Mary Kom’ to ‘Bhaag Milkha Bhaag’ to ‘Dangal’ to ‘M.S.Dhoni: The Untold Story’ many biopics are in the pipeline too. Former Pakistani cricketer Shoaib Akhtar has now commented on his biopic.

Shoaib Akhtar aka Rawalpindi Express has now expressed that he would not mind if a biopic is made on his life. The talented cricketer confessed that it is for the filmmakers to decide whether they want to make a film based on him.

The candid cricketer also shared which Bollywood actor he would choose to play him on screen. Akhtar expressed that superstar Salman Khan should essay his role on the silver screen if a biopic is ever made. Salman Khan is ruling the tinsel town currently with his back to back super hit films. Dabangg Khan’s just released film ‘Sultan’ has already broken many records.

Salman who is open to doing unique roles might surely be apt for playing Shoaib Akhtar on screen. The biopic will be too interesting with Salman’s presence. Shoaib Akhtar will soon make his presence on the small screen in the comedy show, ‘Indian Mazak League.’

Well, we hope Salman Khan is all ears to Akhtar’s request!  The Bajrangi Bhaijaan actor is also in the news for the sequel of ‘Sultan’. Moreover, the super actor is jam-packed with the ‘Kick’ sequel too.[/tps_footer]