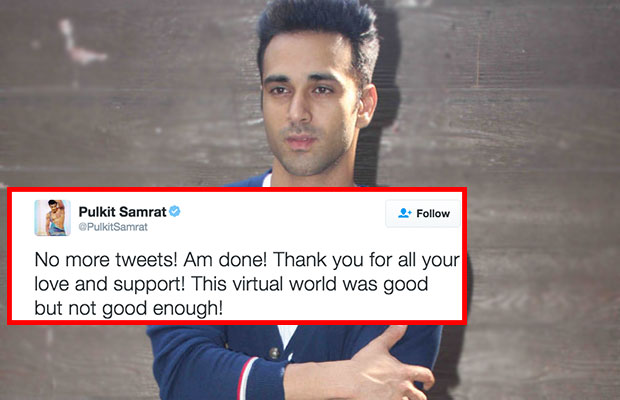 Bollywood stars use their social media accounts to share movie-related as well as day-to-day life with their fans. That’s one of the easiest media for them to connect with their fans. In fact, some actors even have chat sessions, especially on Twitter. But, every coin as two sides. If stars are praised and receive a lot of love and affection, they also have to face criticism on social media. One wrong step and the actors have to face the backlash.

Recently, one of the Bollywood actors has called it quits on Twitter due to excessive negative comments and criticism. Actor Pulkit Samrat is going through hard times not only personally, but also professionally. Unfortunately, his personal life made more news than his professional life. His divorce with Shweta Rohira was in the news for a long time. At the same time, news broke out of his affair with Yami Gautam and this being the reason for Pulkit and Shweta’s spit. Also, his last two films with Yami, Sanam Re and Junooniyat tanked at the box office.

On all the negativity around his personal life and the reports related to same, Pulkit slammed them by tweeting, “I care a DAMN! DAMN samjhe! DAMN. The day we stop entertaining we are strong, else we are weak. No more tweets! Am done! Thank you for all your love and support. This virtual world was good but not good enough!”

He immediately deleted his Twitter account after this. Pulkit and Yami never accepted the dating rumours, but his estranged wife Shweta blames their affair for the separation. Now, we are not sure if Pulkit has taken a break from Twitter permanently or he’ll be back once he cools down.