Rishi Kapoor is known for his dry humour on Twitter and his satirical takes on happenings within India and sometimes outside India as well. He has no filter in his mouth and he is proud about it. He uses his “freedom of speech” all the times, and sometimes even crosses a line.

His updates on social media, especially Twitter are rash at times. Sometimes it’s him giving back to the social media trollers, required so. But this time it’s shocking to see the whole situation stoop to such a low level.

Celebrating and joining in the happiness of ace director, Karan Johar having twin children via surrogacy, Rishi Kapoor decided to indulge his fans and followers. He tweeted: “QUIZ. What do Rishi Kapoor and Karan Johar have something similar and common between them?” 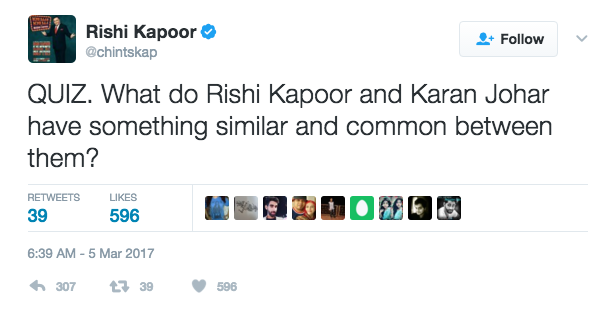 Soon after he re-tweeted the correct answer by a user and wrote: “THATS THE ANSWER! We have sons named after our fathers. Touch wood! Quite a few got it though. Thank you for racking your brains lol” 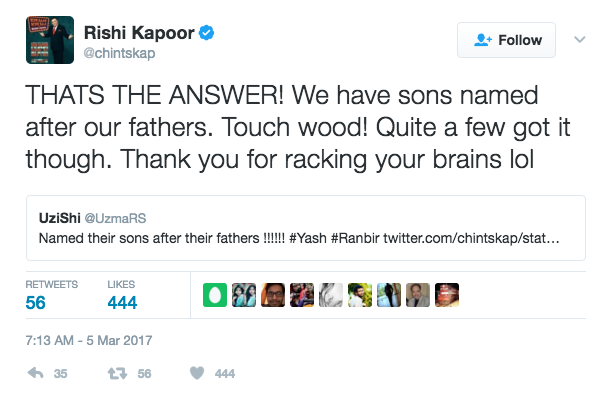 While some gave genuine answers, some other netizens tried to troll him. The Kapoor & Sons star is unbashed about lashing out at these trollers. But what he did next will shock you truly.

Instead of ignoring them and moving on calm, Rishi Kapoor apparently personally DMed two women calling them b***h lick, a**wipe among other words. The two women shared snapshots of the direct message. Along with the snapshot, a user named Samina Rashid wrote: “You are a Kapoor shit @chintskap . Just cuz you are a celebrity you can’t abuse people. Mind it.”

Arnab Goswami retweeted her status calling Rishi Kapoor an “ex Bollywood star” and wrote, “#Disgusting how an ex. bollywood star abused a woman in DM and then blocked her. @krazysamina1 @chintskap

This is not the first time when the actor has been caught in the eye of the storm over his controversial tweets. But this is quite appalling if this is true.

Not only this, last night, when a user posed a question to the senior actor asking if this is the act of getting away with things just because they are a celebrity, Chintu-ji replied scornfully calling that person a ‘dickhead’.

Using of such abusive words on social media platform by celebrities who have lakhs of followers is uncalled for. Agreed that celebrities are humans as well, but stooping so low is unrequited whether by a common man or a celebrity.

What do you think of celebrities behaving the way they do sometimes on social media is justificable?