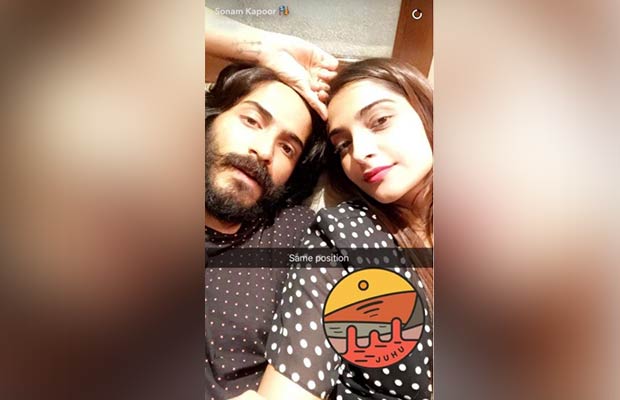 [tps_footer]We’ve often heard that our favorite celebs are just like us. While we’ve heard that many times, it does seem impossible to believe especially when our favorite celebs tend to seems more ‘larger than life’ that it is possible for us to seem. Well, Sonam Kapoor who is undeniably one of Bollywood’s chicest young ladies certainly makes us feel that way on many occasions including her appearances on the Cannes red carpet this year.

Well, one look at this picture and you’ll have to reconsider the level to which you and Sonam are alike.

In this picture that the Fashionista of Bollywood shared on social media, we see her lounging with her brother Harshvardhan Kapoor in a manner similar to how we would be lazing around at home. The two are seen in similar poses and expressions with just goes to show how close the two are in real life. For the uninformed, Harshvardhan who is Anil Kapoor’s youngest, will be seen in his debut film ‘Mirzya’ in a few months at most. We think he looks rather ruggedly handsome in this picture.

On the professional front, Sonam’s last release ‘Neerja’ based on the life of Neerja Bhanot and her heroic act of bravery against terrorism proved to be one of her best performances till date. She has also been praised for her portrayal of ‘Neerja’ by fans, critic and the media. While rumors suggest that she would sign sister Rhea Kapoor’s next film, she has not yet officially declared anything about her upcoming work plans.