Mika Singh is in trouble for his latest tweet about his upcoming shows. Twitteratis attacked the singer for being unpatriotic.

Singer Mika Singh is expected to perform two shows internationally at Chicago and Houston on August 12 and 13. He shared a picture on his twitter with the caption “Be ready to rock with me. Houston and Chicago…. I’m coming to rock you guys Jai hind.”

Be ready to rock with me ..Housten and chicago…. I’m coming to rock you guys Jai hind:) pic.twitter.com/nTbvpF1g7P

Mika Singh recorded a video with a friend talking about his upcoming shows. In the short video, the singer is seen saying, ”Jaise hum sab ko pata hai ki hamar Hinudstan jo tha…15 August ko azzad hua… aur 14th ko hamara Pakistan azaad hua…(As we all know that our India got freedom on 15th August and on 14th our Pakistan got freedom)”

Mika Singh’s statement has made Indians angry over the fact that he referred to Pakistan as ‘humara (ours)’ which clearly irritated the indian twitter users.
A user got hold of a video of Mika Singh wishing happy independence to Pakistan and Twitteratis started trolling him for the choice of words. Twitteratis lashed out saying, “Shame on you. You are celebrating Pakistani Day? Do you know how many of our army Jawan are being killed by Pakistan?”

The 40-year-old singer faced criticism from Twitteratis for saying ‘Apna Pakistan in the video. Mika Singh’s statement has caused a stir on social media where people have now started.

Shame on U @MikaSingh U R celebrating Pakistani Day?
Do U know how many of our Army Jawan are being killed by PAK?@republic pic.twitter.com/TuFljZohIW

A twitter user dragged the singer down for being a hypocrite and misleading people.

What is this uncle?? pic.twitter.com/qYO0LrrsbU

The singer immediately called the account out and shared a picture of singer Atif Aslam and Sonu Nigam performing internationally as well.

The account then shamed him for even dragging the other two into this and to know his mistakes. Many other fans and users joined in giving their own opinions on the matter.

Why he should he care for army jawans? They can do anything for money. Money first country later.

Shame on u @MikaSingh ????u r supporting a country which has killed thousands of our civilians & army men….You r a disgrace #MikaSingh https://t.co/s9JCXdXNFZ

Shame on you Sir , our soldiers getting killed everyday and you are selling yourself out for money ? 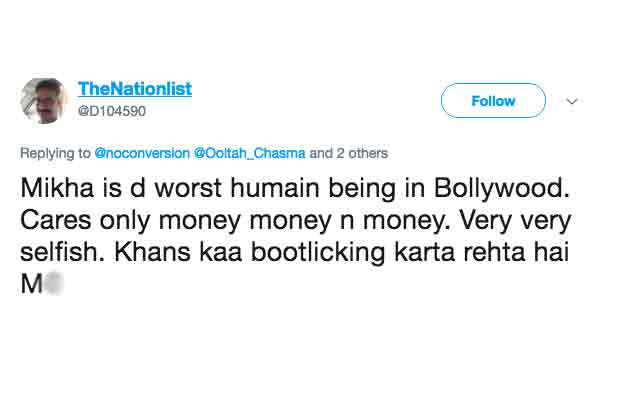 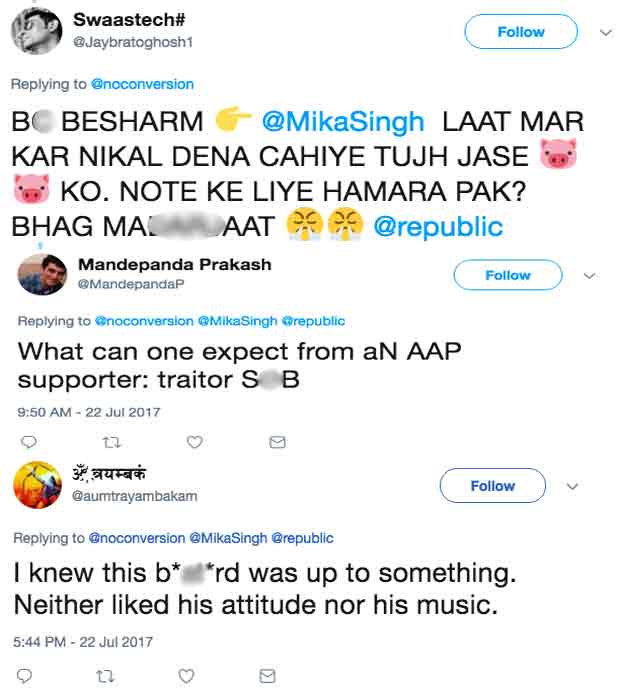 After the URI attacks, Pakistani artists were banned from performing in the country. Actors and singers were asked to return back to Pakistan. Mika Singh has hit sings like Mauji Hi Mauja and Dhinka Chika under his name but this recent tweet could cause some trouble to his fan following.

Watch Video : Shahid Kapoor and Mira Rajput Can’t Take Eyes Of Each Other At Vogue Awards 2017