After throwing a grand Diwali party, Aamir Khan and his wife Kiran Rao decided to take a holiday. Unlike most celebrities who prefer international getaways, Aamir Khan chose Arunachal Pradesh! And seems like he is already in love with the beautiful state. He shared a selfie with Kiran and captioned it: “In the wilderness of Arunachal. It’s a really beautiful place!”

It has been reported that the couple along with their son, Azad Rao Khan will bring in Kiran’s 43rd birthday (November 7) in Arunachal Pradesh.

It was further reported that: “Aamir and Kiran are no strangers to the North East. In fact, he had celebrated her 40th birthday in Assam in a big way. This year, he will celebrate her birthday in relative seclusion. His other children Ira and Junaid are currently overseas and won’t be joining him on this vacay.” 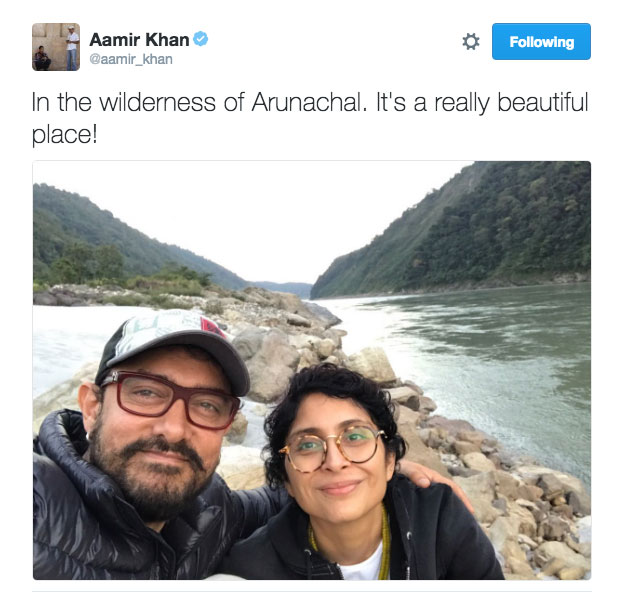 The source also added: “He (Aamir) takes effort in research, planning and execution and keeps all details under wraps as he is extremely romantic at heart. Permits are required for entering into any place in Arunachal Pradesh and Aamir has arranged for all of that. Everything has been meticulously planned by him. He planned a surprise for Kiran and told her only on Diwali and then took off for AP on Monday night. Both Aamir and Kiran are romantics and prefer the seclusion during this special time.”

Every year, Aamir celebrates wife’s birthday in a special way. Last year, it was with friends at the bungalow in Panchgani and year before that was Tokyo, a destination Kiran had been longing to visit.

Perks of having a perfectionist husband! Kiran is one lucky lady.