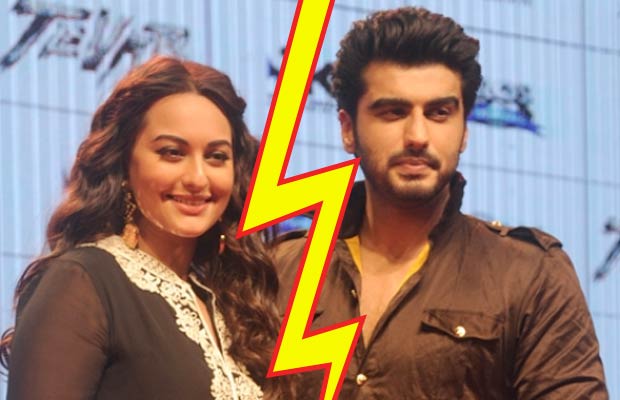 [tps_footer]Although Tevar starring Sonakshi Sinha and Arjun Kapoor bombed at the box office we were still expecting Sona-Arjun to at least maintain a good friend kind of a rapport but they disappointed everyone at a recent event where the people around them were shocked to see so much of coldness between once upon a time BFFs of Bollywood. We can’t forget the fun and engaging chemistry between Sonakshi Sinha and Arjun Kapoor throughout the Tevar movie promotions, we feel the promotion gigs were far more entertaining than the entire flick. Don’t you? Keeping the jokes aside, there were rumours of Arjun and Sona dating for a while and yes, they denied it but what is making us curious is the fact, this two ex-BFF’s of B-Town don’t even like to look at each other or greet.

There was a football match between cricketers and Bollywood actors which was well attended by many B-Town stars like Amitabh Bachchan, Shilpa Shetty Kundra, Abhishek Bachchan, Ranbir Kapoor, Aditya Roy Kapur, and more. Even Sonakshi Sinha and Arjun Kapoor were a part of this event and Sonakshi‘s Ex boyfriend Bunty Sajdeh was present too. So, what was stopping Arjun-Sona from interacting with each other? We know that both of them are bindass and fun-loving so what went wrong between the two that they had nothing to tell each other and they just looked through each other when Sonakshi was leaving the event at half-time.

It was weird for others to see this kind of coldness and awkwardness between Sona and Arjun but we just hope they sort out their unknown issues and get back to each other at least as ‘good friends’ if not a power couple of B-Town.[/tps_footer]