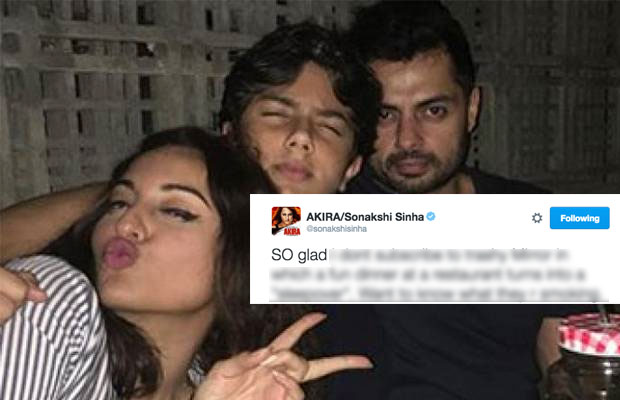 Bollywood actress Sonakshi Sinha’s personal life has become a talk of the town after a leading tabloid reported that the actress stayed back at alleged boyfriend Bunty Sajdeh’s house along with other friends. Her recent outing with Bunty and his family left everything speculating about their secret relationship.

Well, this did not go well for Sonakshi Sinha and she deiced to slam the reports in the best way. She took to her twitter saying, “SO glad i dont subscribe to trashy Mirror in which a fun dinner at a restaurant turns into a “sleepover”. Want to know what they r smoking.”

The actress has never been vocal about her relationship but it is said that the actress is dating Sohail Khan‘s brother-in-law Bunty Sajdeh since a very long time. In fact, her recent outing with Sohail Khan and family only proved everything.

The Dabangg actress was spotted hanging out with her rumoured boyfriend Bunty, as it was his mother’s 60th birthday celebrations. The picture that is making rounds on the Internet sees Sonakshi enjoying herself to the fullest with her beau and his family.

On the professional front, Sonakshi Sinha will be seen in two upcoming films- Akira and Force 2.