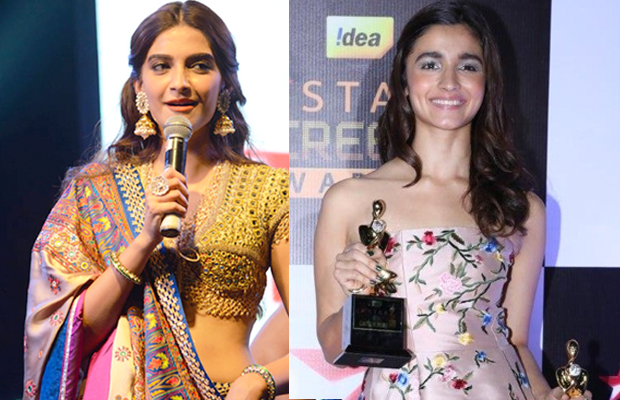 Sonam Kapoor has been the talk of B-Town this year for two things in 2016; one was for the actor’s career best performance in Neerja and second was losing the awards to Alia Bhatt for her portrayal of a Bihari immigrant in Udta Punjab.

A lot has been written about who deserved to win the awards. Most viewers felt it should have been Sonam, but most awards were received by Alia.

In an interview, Sonam speaks her mind about getting nominated but not winning at the Star Screen award. Here’s what she had to say: “If I haven’t won it, then I believe that it was what they thought was the best. That’s up to Star Screen. I was not offended, I am just excited to be nominated, it makes me feel really good.

She further said, I don’t know if it’s important, but it does make you feel good about yourself. If the audience thinks I deserve to win, I am thrilled. Getting the audience’s love is all an actor craves for. So when they feel I deserve it, it means the world to me. But how can I force someone to give me an award? Maybe other actors can, but that’s not my personality. I don’t think I would change who I am to just win an award. I am really glad that the audiences think I should win, but I also believe it shouldn’t be about winning. It takes away from Neerja and it makes me feel uncomfortable after a point.”

While Sonam hasn’t been on film set for over a year, the fashionista seems to be happy relaxing and soaking in the success of her film Neerja, where she portrayed the titular character as Neerja Bhanot, an air hostess who lost her life saving her passengers from a hijack.

Sonam will start shooting for her home production Veere Di Wedding also starring Kareena Kapoor Khan, which was pushed and reschedule, will finally be on floor this year in May.

Sonam at least had a release at the box-office this year. Her “colleague” Deepika Padukone had no releases in 2016. Deepika was mostly in news for her Hollywood debut, comparisons with Priyanka Chopra and her alleged relationship with Ranveer Singh.