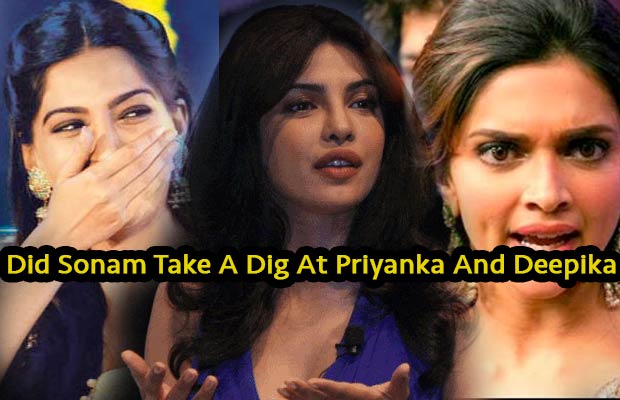 [tps_footer]Sonam Kapoor has roared at the box office and in the hearts of her fans and loved ones after the release of “Neerja” and she is taking her career even more seriously than ever. After making it big in the Bollywood, it was asked to Sonam when is she going to work in a Hollywood movie and she said “I do not want to start all over again. If I can get something with a lot of gravitas, I would definitely want to do it. I would approach them myself. If it’s a great role, why not ? But if it has something right and which attracts me,” Hmm.. That’s a fair thing to say and it’s better to take career more forward in an industry where you are getting success and have made a mark than to start in a new industry, especially, without any family support.

Sonam also said indirectly that she is not looking forward to conquer and rule the world like Priyanka Chopra, Deepika Padukone, Irrfan Khan have been doing. She would rather stick to do movies in any language and take her own movies to the West and the rest of the world instead of just be an “International sensation”, she would rather work more on her craft and give best to the world of cinema and not just be a “glam doll”

Point is taken Sonam. But what about your three shots in the song “Hymn” by Coldplay. Beyonce got more footage than you, including the desi boys playing with the colours and dancing in this video were seen more than you. Any thoughts on this decision ???

Priyanka and Deepika are powerhouse performers and yes, exotic Indian beauties too, that we are really proud of. Sonam, we expected from you to be more supportive towards actors who are representing India on an international level instead of just thinking about your own movie and acting skills. But anyways best wishes for your future projects.

Hope you get a project soon where you can showcase your acting skill again and also wish to hear something good about your contemporaries from you who are doing pretty well in the West, too. And it took a long time for Peecee and Deepika to start their career from the scratch even by auditioning several times to bag one role. That’s not easy at all to do for anyone and the this kind of success, Priyanka Chopra, Deepika Padukone, Irrfan Khan and many more, surely deserve. We hope you make it to this list someday.[/tps_footer]