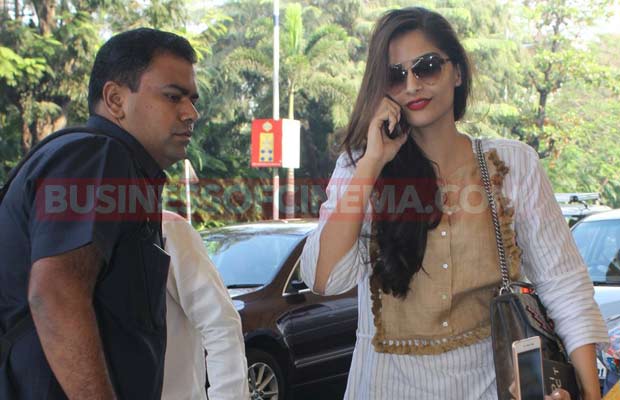 [tps_footer]Sonam Kapoor, a “star” born to live her life the way she wants to and knows very well how to speak her mind on her own in front of the whole world. Irrespective of what others will say or think about her, showed a lot of courage once again, this time off screen too.

She arrived at an event and our beautiful fashionista walked the red carpet and made journalists and photographers crave to get close to her and get her best pics and latest news and bytes. But unfortunately one of the bouncer around Sonam Kapoor pushed a journalist who wanted to ask a question to Sonam and in return Sonam lashed out on this bouncer defending the journalist, saying that “he is just doing his job” and that’s true.

Even we don’t know why these bouncers and bodyguards of stars show more attitude and rude behavior with fans and media, than what even the stars hesitate to do. It’s shameful to see such an uncivilized behavior at various events by their guards who protect them but become animals with others.

Even Salman Khan‘s bodyguards cross their limits with photographers which led to boycott Salman Khan from being photographed anywhere and later things were sorted between them. And then recently, there was a news that Salman Khan slapped his own guard for misbehaving with a fan who wanted to take a selfie with him. Well, good to see stars being vigilant enough of who is doing what and taking action against or for, immediately. This bouncer who pushed the journalist has apologized to both, Sonam and the journalist. Things are sorted now.

But wayyy to gooo Sonam, Neerja hangover will take time to come down. But we are always happy to see you and others standing up against the wrongs things that keep happening on this planet. We should be strong enough to fight back, if required.[/tps_footer]