In a series of tweets, popular singer Sonu Nigam declared his decision to quit Twitter. In support of singer Abhijeet Bhattacharya and actor Paresh Rawal, Sonu Nigam showed no qualms in stating that the social media platform lacks “balance” and was clearly “one-sided”.

Bollywood singer Sonu Nigam sent out a series of 24 tweets building up to his exit from Twitter. He asked the media and his followers to take screenshots of his tweets as the messages will soon disappear when he leaves the website.

As he announced his decision to quit Twitter, and bid adieu to his 7 million followers, he knew it would leave most ‘disappointed’ and ‘angry’ and ‘some Sadists Happy’.

Before quitting, he talked about how actor Paresh Rawal and singer Abhijeet Bhattacharya are being criticised on social media for sharing their controversial views on Twitter. 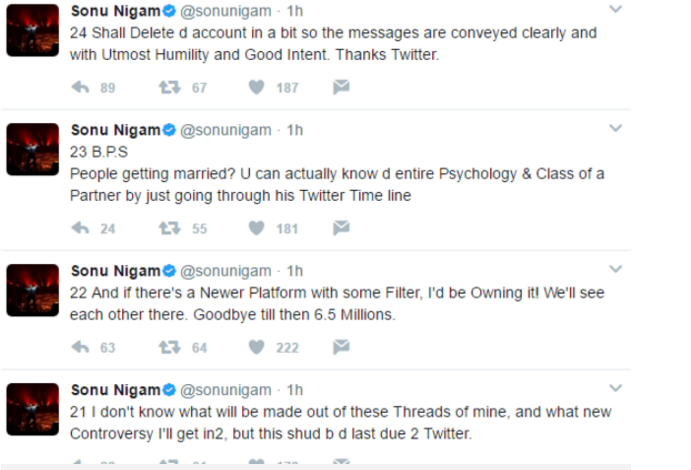 The singer, who believes he has a balanced approach, blamed media for being divided. He even mentioned that social networking site is full of “some nationalists, some just cold blooded pseudos”.

(“People blessing you on one hand; and some wishing Death upon you. Even some young Girls and Boys and Kids behave like terrorists)”, he tweeted. 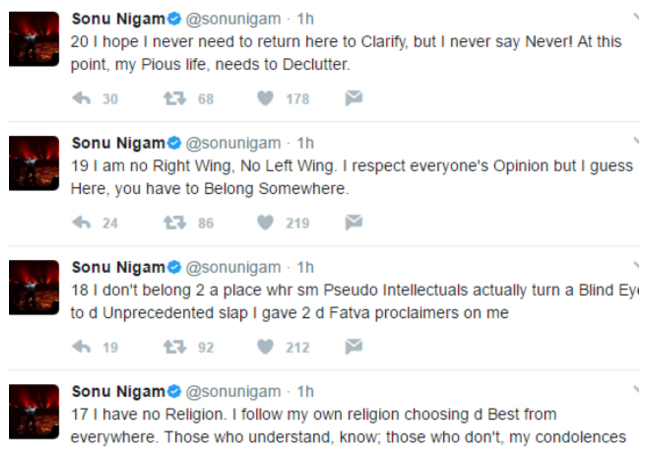 While supporting Paresh, Sonu said if “A woman can endorse a picture of Gautam Gambhir in the front of the Army jeep”, why should he be mocked for doing exactly the same?” 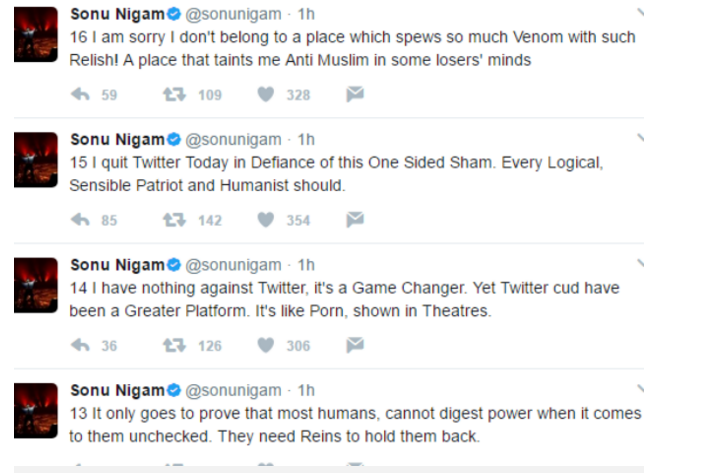 While talking about Paresh’s recent comment on author Arundhati Roy, he tweeted since she has the right to have an opinion about Kashmir even other “other billion Indians have the right to feel let down too”. 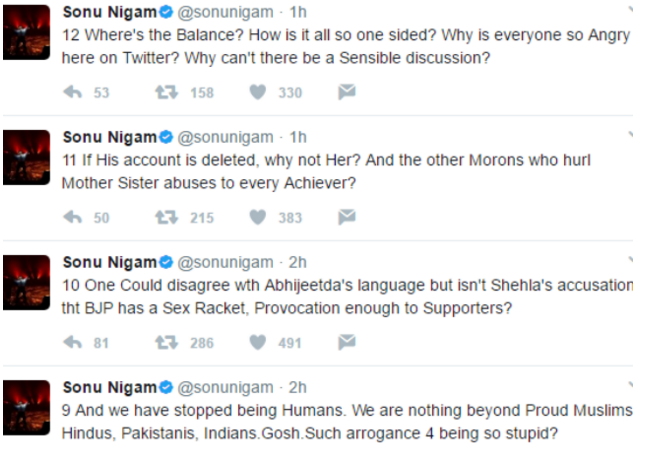 The singer also mentioned that if Abhijeet’s account has been deleted then why wasn’t Shehla Rashid’s too?

“Where’s the Balance? How is it all so one sided? Why is everyone so Angry here on Twitter? Why can’t there be a Sensible discussion?”(sic), he tweeted. 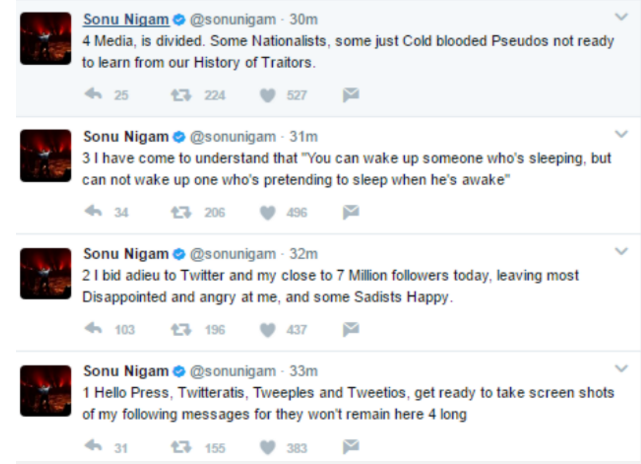 Sonu also stated that he doesn’t “belong to a place which spews so much Venom with such Relish! A place that taints me Anti Muslim in some losers’ minds”.

“I don’t belong 2 a place whr sm Pseudo Intellectuals actually turn a Blind Eye to d Unprecedented slap I gave 2 d Fatva proclaimers on me,’ his next tweet read.

He also tweeted a sane advise to all those who are planning to get married. “People getting married? U can actually know d entire Psychology & Class of a Partner by just going through his Twitter Time line,” he tweeted.

While biding a final goodbye to his fans and followers, Sonu Nigam said he would create a new account only if the social networking site comes out with a new filter.

In April this year, Sonu Nigam sparked another controversy where he tweeted how the sounding of morning azaan on loudspeakers at a mosque near his residence would not let him get proper sleep. His statements angered many and a Muslim cleric even offered Rs 10 lakh to anyone who would shave the singer’s head. Sonu called a press conference to his home where he got himself tonsured. The cleric still did not pay him the reward.

Sonu Nigam wrote 24 tweets to explain why he is leaving twitter. He is not good twipple, 140 characters are enough. He should leave ASAP.

So yesterday singer Abhijeet’s account was suspended, today Sonu Nigam quits Twitter! Does this show that nationalists have no place here?

Everyone has Freedom of Speech*

After Posting Series Of 24 Tweets, Sonu Nigam Quits Twitter.
Irony Is Those Celebrating It, Are So Called Flag Carriers Of ‘FOE’.#SonuNigam pic.twitter.com/lhXTXW5GNE

I’m posting screenshots of my tweets along with urs so you know that you are not alone. Please don’t give up for our sake. pic.twitter.com/srAC2QECWT