Recently, a widely read Indian daily reported that Sonu Nigam has been ‘spending a lot of time in Dubai these days’ and ‘raking in the moolah’. Apparently, ‘the wealthy Sindhi brigade in UAE is delighted to have him light up their mehfils and Diwali taash parties with his stereophonic voice.’

This kind of speculative reporting didn’t go well with the popular playback singer. He took to Twitter and gave his side of the story in seemingly livid state.

In the first of the three tweets he wrote, “Dear @MumbaiMirror . I know u don’t think high of me, but please don’t jump to conclusions. Dubai, is where my brothers live. No moolah thus”

“And @MumbaiMirror I don’t look at mehfil singing condescendingly, but darlings, that’s not my forte. Whatever happened 2 ethical reporting?”

Finally ended by saying “And dear @MumbaiMirror . Remember, what u sow, so u reap. Your children reap. Karma, will send u an apt Return Gift on my Behalf. Blessings” 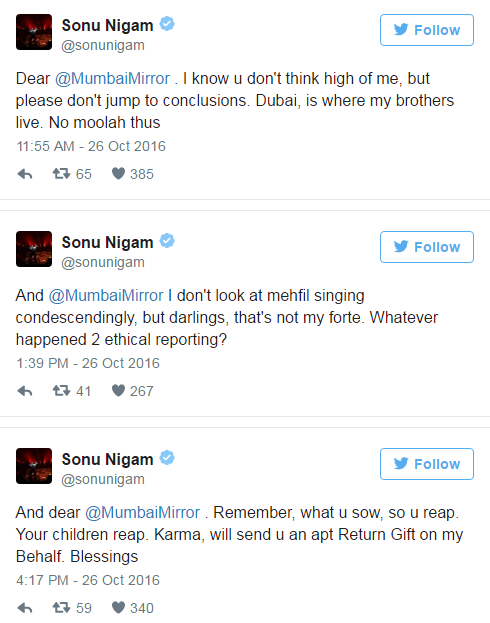