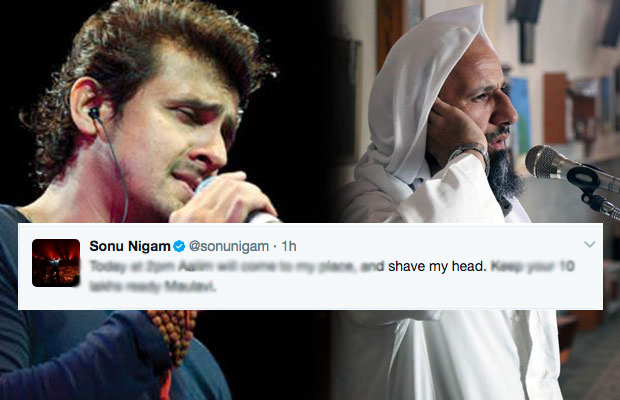 Bollywood singer Sonu Nigam has hit the headlines after his tweet against waking up to the azaan.

Sonu Nigam had left his fans angry with the series of tweets against the azaan (a mosque’s call to prayer). On Monday morning, Sonu Nigam was apparently woken up by the sound of Azaan from a local mosque. The singer complained of ‘forced religiousness’ on being woken up to the sound of azaan and also wrote that he has to wake up despite not being a Muslim.

Following his tweets, a senior member of a minority council issued a fatwa against singer Sonu Nigam for his comments over azaan. Syed Sha Atef Ali Al Quaderi, vice president, West Bengal Minority United Council issued a fatwa saying, “If anyone can shave his hair, put a garland of old torn shoes around his neck and tour him around the country I personally announce an award of Rs 10 lakh for that person.”

Terming Nigam as an anti-national, Quaderi said at a press conference today that no one had the right to hurt the sentiments of any other religion. “I would have reacted the same way if one had talked ill about the sound of bells coming from a temple as well. If we all become so intolerant about each other’s religions, we will soon have a bunch of atheists in our country. People like Nigam should be driven out of the country,” he added. He also said that the council will organise a mass rally at Rani Rashmoni Avenue in central Kolkata.

Reacting to Quaderi’s fatwa, Sonu Nigam has agreed to go bald. The singer took to Twitter saying, “Today at 2pm Aalim will come to my place, and shave my head. Keep your 10 lakhs ready Maulavi.”

He also invites media to his home for the same.

Meanwhile, Sonu Nigam in his defend has said that all he wanted was to put a stop on loudspeakers and had nothing against azaan.