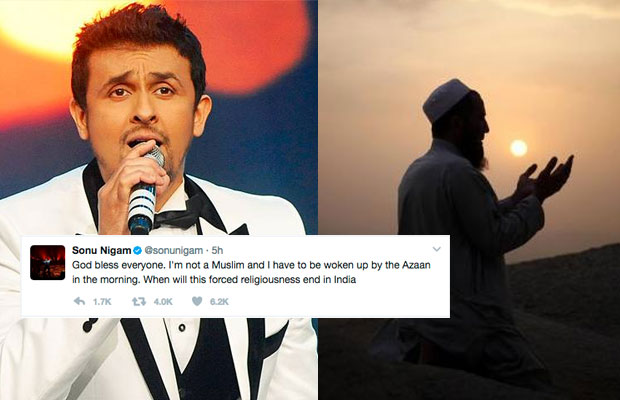 Singer Sonu Nigam has taken twitter by the storm with his tweets on Azaan.

Bollywood singer Sonu Nigam has hit the headlines with his controversial tweets this morning. The singer has raised eyebrows with a series of tweets against the azaan, call given by a mosque near his home. Sonu Nigam has termed the azaan call as “forced religiousness”.

He tweeted, “God bless everyone. I’m not a Muslim and I have to be woken up by the Azaan in the morning. When will this forced religiousness end in India.”

Questioning the use of loudspeakers for azaan, the singer wrote, “And by the way Mohammed did not have electricity when he made Islam… Why do I have to have this cacophony after Edison?”

He then went on to write, “I don’t believe in any temple or gurudwara using electricity To wake up people who don’t follow the religion . Why then..? Honest? True?”

He even termed the whole practice as “gundagardi”

To people who are not aware, Azaan is a special proclamation to call Muslims to the mosque for offering prayer. The prayer call is given five times a day, starting the first call early in the morning.