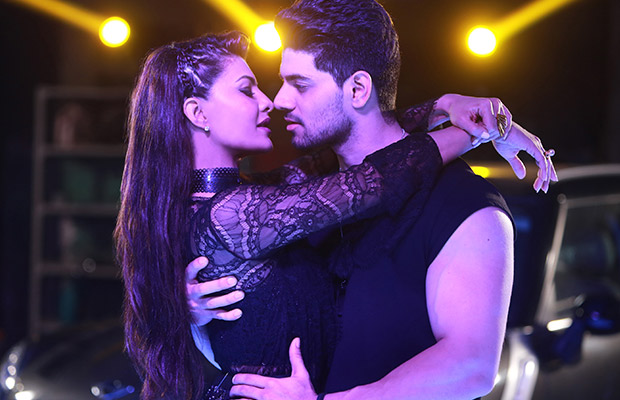 [tps_footer]The fresh pair of Sooraj Pancholi and Jacqueline Fernandez have teamed up for a single titled “GF“, dancing to the tunes of choreographer-turned-filmmaker Remo D’Souza. The duo shot for the Bhushan Kumar-produced video this month in Mumbai.

“It’s a peppy romantic track about a guy who tries to woo a girl he’s fallen in love with at first sight. It was fun working with Jacqueline, she made me comfortable,“ says Sooraj. Salman Khan‘s `Hero’ rehearsed with the actress and the popular 13.13 dance crew before facing the camera and admits that the practise sessions were an “ice-breaker“for them. Given a chance, he’d love to work with her.

Jacqueline also lent her voice and admits that at the creative meeting when Remo suggested that she sing too, her first reaction was a “NO“. “In fact, they didn’t even have female vocals in the song, and included them before they heard me in the studio, “reminisces the actress, who enjoyed jamming with composer Gurinder Seagal. Her dad is a DJ, so a lot of music is played at home. That’s what made her decide to take it up. Now she says, “I would love to sing for a film if the song is right. It’s a nice feather to have in ones’ cap. “

Jacqueline praises the crew but admits the choreography wasn’t easy. “Sooraj worked hard on the steps. He’s chilled out and fun to work with, “she smiles. Sooraj is happy that the trend of music videos is catching on with youngsters. So how will Jacqueline react if a guy tried to impress her? “I will sing back to him, “she laughs, adding, “But the feeling has to be mutual. “[/tps_footer]