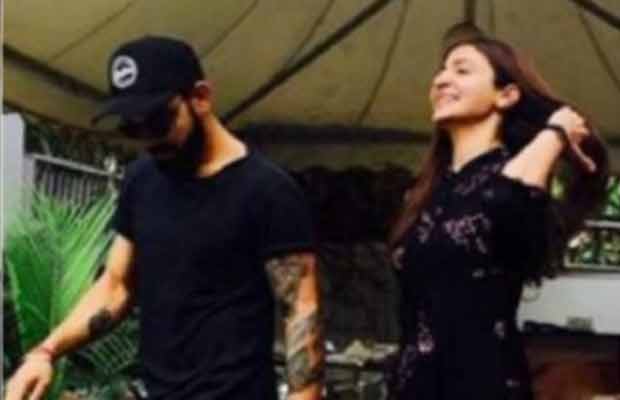 Anushka Sharma and Virat Kohli were spotted hanging out together in Bengaluru.

The bolly-cricket couple Anushka Sharma and Virat Kohli, who earlier shied confessing their relationship in public, is now very much open when it comes to expressing their love for each other. The two of them have started to give us relationship goals as they can be always seen supporting each other in good as well as bad times.

Earlier when Anushka was trolled by people saying that she brings bad luck to Virat, it was the cricketer who had come to her rescue slamming the twitteratis by saying that she has only given him positivity. Also, a few days back we had shown you all how Anushka was a part of Virat’s team, RCB’s celebration of completing 10 years.

RCB has not been able to perform well in this IPL season and therefore the team could not qualify for the playoffs. The cricketer had recently tweeted apologising for his fans for his bad performance, which shows how disappointed he is with himself.

It is again Anushka who has come up supporting Virat in his bad time. We have spotted the two of them outside a restaurant in Bengaluru. The couple was looking quite chilled out and happy. Both of them were colour combined in black. While the actress was dressed up in a summer look, the cricketer had donned a sporty look.

There was one more thing that we noticed when we went through Anushka’s Instagram posts. She recently shared a picture of hers sporting a black cap. Interestingly, it was the same cap that Virat is wearing on their lunch date. Isn’t this just adorable?

The cricketer had surprised everyone he made his picture with the actress as the display picture of his Instagram handle. Also, very recently it was Anushka who had reacted on Virat’s picture on Instagram by saying “You cannot,” where she was warning him to not shave off his beard. The cricketer had cutely surrendered replying “Okay” with a heart emoji. How cute is that!

There are also reports that finally the cricketer is planning to ask the actress for marriage. After Harbhajan Singh – Geeta Basra, Yuvraj Singh – Hazel Keech and Zaheer Khan – Sagarika Ghatge, we feel that Virat Kohli – Anushka Sharma are going to be the next bolly-cricket couple in the town!