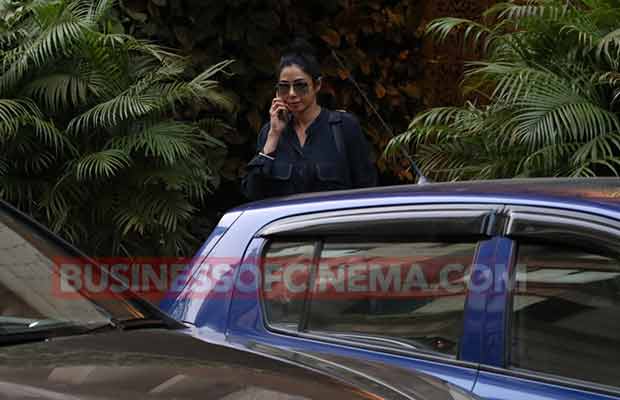 Sridevi seemed to be in a shopping spree as she was spotted outside Manish Malhotra’s store in Khar, Mumbai.

Sridevi looked like she was having a casual day out wearing a black shirt. The renowned actress was busy over the phone and looking at the expressions, she must be talking business.

Sridevi was seen on the small screen after five years. The renowned actress was last seen in TV shows for the promotions of her last venture, English Vinglish. A lot of actors choose to promote their films on the small screen, it has become a trend now. Sridevi’s new film Mom is one of her most ambitious and special projects. She had launched the film at the Zee Cine Awards 2017. The film will also see Nawazuddin Siddiqui playing a negative character in the film.

It is being reported that Mom has gone over budget. An insider spilled the beans on the matter and said,

“Originally, Mom was planned as a raw, real, and gritty drama of a mother’s retaliation to her daughter’s rape. But as the shooting progressed, Boney decided to pull all stops to give the film a look of optimum gloss. Parts of the film were shot in Georgia, even though the script demanded no such destination shooting.”

Interestingly, Mom is Sridevi’s 300th film and she will be completing 50 years in the film industry this year. Mom will hit the theatres in July.