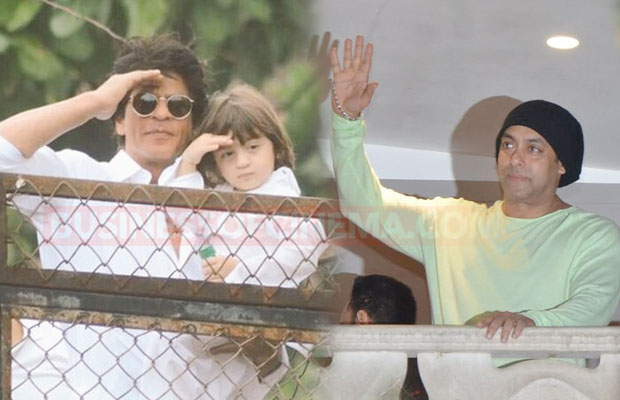 Eid is a festival where friends and foes alike come together, mend their differences and celebrate. Well, similar seems to be the plan of the Khans.

Yes, you heard that right.

Apparently, Shah Rukh Khan and Salman Khan are all set to celebrate the festival today over a feasty dinner.

This afternoon, at a meet and greet session with the media, Shah Rukh revealed this exciting plan.

However, the plan isn’t confirmed yet but SRK said that he’s waiting for Salman’s affirmation to feast on the delicious Eid spread at the Sultan actor’s home.

SRK said, “We are waiting for food from Salman’s home as more delicacies are prepared there. May go to Salman’s house for Eid.” Well, we can’t wait to see a picture of the actors sharing their usual Eid hug.

Meanwhile, the two Khans have been spending good time together these days. Shah Rukh even spoke about the pictures from their cycling meet, which went viral recently. He said, for so long that it was already morning. So Salman suggested we go home cycling since it’s healthy. Then I dropped him home by my car. ”

Now aren’t these signs proof enough that two actors have left all grudges behind and completely moved on!

Well all’s well that ends well. Now we can only wait for the news about a sequel of Karan Arjun to go on the floors!

All said and done, we would also like to inform you that this is girlfriend Iulia Vantur’s first Eid with Salman Khan.

Stay tuned to Businessofcinema.com to receive further updates of the Khans!