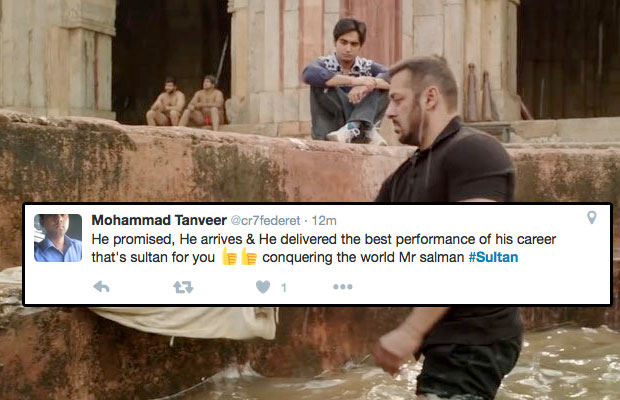 [tps_footer]The day is finally here and it’s time the most-awaited, highly anticipated movie of the year, Sultan gets released for all of Salman‘s excited fans.

The film has been constantly talked about in the industry. Everyone is looking at the production with high hopes and the movie has already commenced breaking all records.

Sultan has broken the record set by Prem Ratan Dhan Payo of pre-release sales and is expected to break many more.

The movie is having the biggest ever bollywood opening in India. The movie is getting released in about 4800 screens across the country.

However, this is just a fraction which explains how humongous the project it.

The movie is predicted to break all past opening day records with the collection of a whooping amount of Rs. 40 crore on the first day itself.

This gigantic project has already been released today and the continuously pouring tweets appreciating the star and the movie are only increasing our anticipation…
Have a look yourselves!

Watched #Sultan. Definitely worth it. Excellent performances by @BeingSalmanKhan and @AnushkaSharma !

officially Anushka sharma will be the no.1 actress of bollywood from today. #Sultan will collect more than 300cr. congratz @AnushkaSharma

He promised, He arrives & He delivered the best performance of his career that’s sultan for you ?? conquering the world Mr salman #Sultan

Go watch #Sultan. First half has been beyond good, rare for a bollywood movie.

& Those Chants are So Loud that You Just Can’t hear a Single Word there Besides Salman Salman And Sounds of Whistles! \m/ #SULTAN