The actress Sunny Leone and her husband Daniel Weber have adopted a baby girl!

The actress Sunny Leone is married to actor Daniel Weber. It has been more than six years but the couple did not have a baby until now. Yes, you read that right. Sunny and Daniel are now parents to a cute little girl. The couple decided to adopt a baby to complete their family and according to the actress, it was love at first sight!

The girl’s name was Nisha who will now be called Nisha Kaur Weber. She is from the Latur district of Maharashtra. In a conversation with Hindustan Times, the couple talked about the name of the child.

When they were asked upon as to who thought of the name, Sunny says, “We didn’t do that.” Daniel adds saying, “That was her name. They told us that we can change and we had our minds filled with names but she is who she is. Every time, we called her by other names, it just didn’t fit her.”

Sunny also says, “We like the name. Her name is Nisha Kaur Weber. It’s Kaur since I am Punjabi, as my real name is Karenjit Kaur. I always wanted that whatever names we choose, the middle name be Singh or Kaur. When I looked up the meaning of Nisha, it’s the Hindu goddess of night.”

Talking about parenthood being a huge responsibility, the actress says, “It’s a responsibility for the rest of our lives. But we have been ready for that — physically, mentally and financially. We were working really hard because we wanted to start a family, and this is the way it’s going to start, so it’s amazing.”

The couple is quite happy with the addition of new member in their family. The actress’ followers and the common public have also started reacting on it. The social media site Twitter has been flooded with the reactions from the people.

Some are praising the couple for adopting a baby. And then there are some others who are criticising them and calling the act a publicity stunt.

Check out some of the tweets from the people: 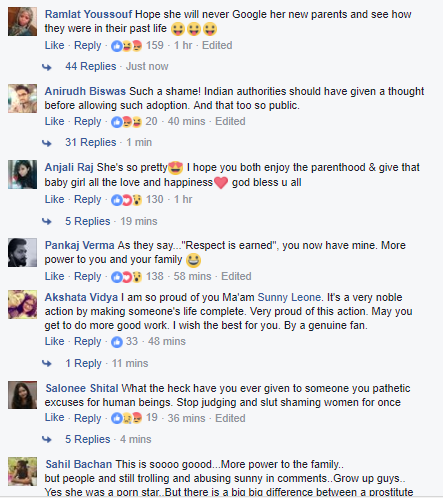