Jacqueline Fernandez and Karan Johar were seeing bonding too well on the sets of this season of Jhalak Dikhla Jaa. So it doesn’t come as a big surprise that Jacky will be soon seen in a film alongside Sushant Singh Rajput in a movie under Johar’s Dharma Productions.

The big announcement of the film was made by Karan Johar on the micro-blogging website, Twitter by sharing a picture and writing: “The FRANCHISE FUN begins….DRIVE directed by @Tarunmansukhani starring @itsSSR and @Asli_Jacqueline starts today!!The first of the series!” 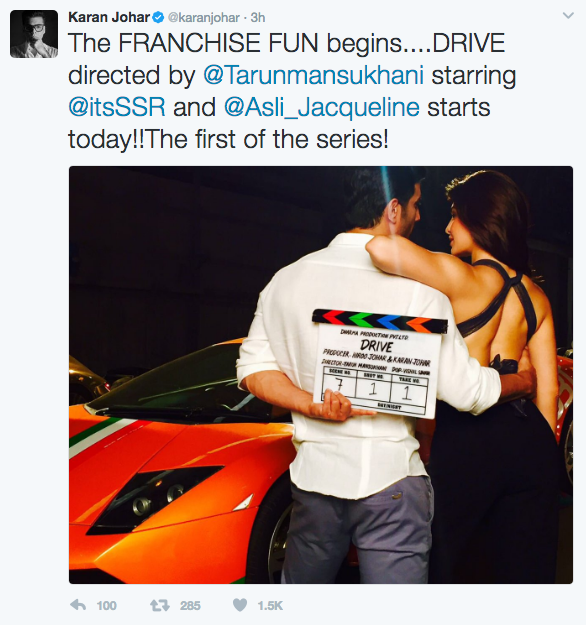 Not only did the producer of the film announce the film, but also put it out there that its going to be the first installment in the franchise. In the picture shared, SSR and Jacqueline holding a clapper, look super sexy where while Sushant looks neat in a white shirt and a pair of blue jeans and Jacky dons a sexy look wearing a black backless jumpsuit. There is also a sleek orange car in the backdrop of the gorgeous looking pair.

Seems to us that it just might be a desi version of Fast and Furious plus some Rohit Shetty elements and Dhoom stunts!!

Mansukhani, who last directed the 2008 hit romantic comedy ‘Dostana’, also took to Twitter to share his excitement for the project. He wrote: “7 years 345 days later… am back on set!!!!” 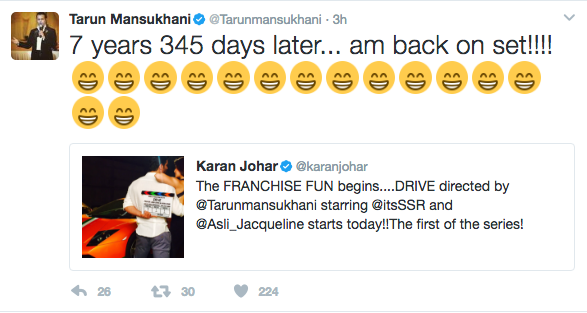 To which Karan responded, “It’s cool Tarun!! Fast cars will more than make up for it!”

Karan’s ‘Student of the Year’ actors, Alia Bhatt and Varun Dhawan, also took to Twitter to congratulate the team. Varun wrote: “Best of luck Tarun can’t wait to watch your film on the big screen” and Alia tweeted: “Best of luck @Tarunmansukhani !!!! So so happy for you hope it’s a smooth, fulfilling ” DRIVE “.