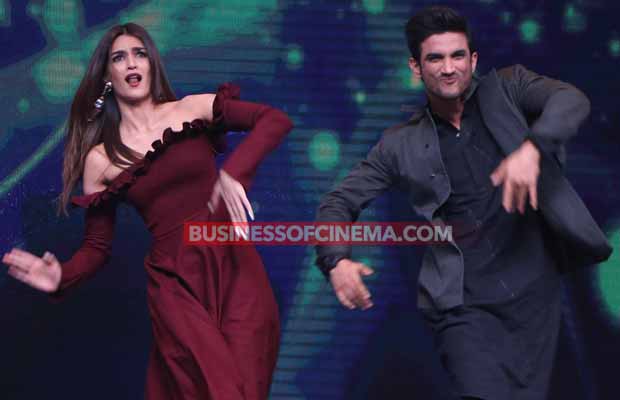 Sushant Singh Rajput and Kriti Sanon visited the sets of Sa Re Ga Ma Pa L’il Champs for the promotion of their film Raabta. The duo had fun on the sets with the talented kids while shooting for an episode with them.

Sushant Singh Rajput wore a black outfit with a black court, while Kriti Sanon wore an off-shoulder maroon dress. Kriti kept the accessories simple with long earrings and a simple middle parting for her hair. The couple showed off some dance moves on stage to entertain the kids. A lot of photos were clicked on stage and backstage. Aditya Narayan the host of the show posted a picture of himself posing with the duo.

The song Main Tera Boyfriend went viral hours after it was released on YouTube. The song video shows the duo show off some great dance moves. The video is also a visual treat as Kriti Sanon looks smashing in all her looks. It is a party number and a tune that will make you want to get off your seat and dance. The song is sung by Arijit Singh and Neha Kakkar and written by Kumaar.The song is composed by Sourav Roy and Eric Pillai.

The movie will release on 9th June. The movie is produced by Dinesh Vijan, Homi Adajania, Bhushan Kumar and Krishan Kumar.The film is a mix of love and history. The lead Kriti Sanon and Sushant Singh Rajput play the ordinary characters of Shiv and Saira who fall in love. Until one day Saira meets her lover from the past. The film journeys through time and goes back a hundred years. The film talks about the realms of the earth as the subtitle suggests ‘everything is connected’.

Sushant Singh Rajput and Kriti Sanon are rumoured to be dating and have been promoting their film on TV Shows and IPL matches. The episode of the duo of Sa Re Ga Ma Pa L’il Champs will air on Zee TV will be aired on Saturday 27th May.