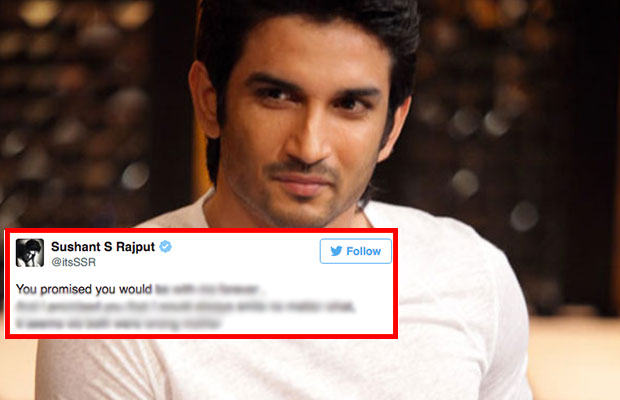 Sushant Singh Rajput lost his mother at a very young age when he was in 12th std. The actor was very close and attached to him mom than his dad. Many times he has expressed how much he misses his mom and wants her beside him. Well, today, the Kai Po Che actor shared a message to his mom that will melt your hearts.

Sushant’s tweet says, ‘You promised you would be with me forever , And I promised you that I would always smile no matter what, It seems we both were wrong mother.’

It seems like he is really missing his mother a lot. That’s also quite natural as mothers are the most beautiful creation of nature. The comfort, love, and care a mother gives, no one in the world can give. Apparently, the actor also stated that he wants to get a tattoo done on his neck with the word, ‘Maa’. He said that at least his mother will be with him in some way.

On the professional front, Sushant has a very big release this year, M S Dhoni: The Untold Story. The film is a biopic based on Indian Cricket caption Mahendra Singh Dhoni. The film depicts some unknown and untold story about the Indian skipper about his personal as well as professional life. Directed by Neeraj Pandey, the film also stars  Kiara Advani and Anupam Kher in supporting roles. The trailer looks quite promising. MS Dhoni is dubbed and will be released simultaneously in Tamil, Telugu, Marathi. It will release on September 30.