Sushmita Sen is one of the most confident actresses in the tinsel town. The actress not only is gorgeous beyond words but she also has the ability to speak her own mind. The starlet who won the Miss Universe crown for India in 1994 is still a favorite of the masses. Apart from giving various hit films, Sushmita has also attracted the eyeballs for her life decisions.

Sen is a proud single mother and her approach towards her children is applauded by all. Recently, Donald Trump and Hilary Clinton participated in the presidential debate and Hillary expressed as to how Donald once fat shamed a former Miss Universe Alicia Machado.

Donald Trump had labeled the former Miss Universe as Miss Piggy. Just when the news broke out to the masses various opinions and views started flooding on the micro-blogging site twitter. One of the users then asked journalist Barkha Dutt whether she would interview Sushmita Sen who was also a Miss Universe.

Barkha Dutt replied to post saying, “Frankly its irrelevant what she looked like. Its how she was spoken of that counts- not girth/glamour @thegarance @husainhaqqani 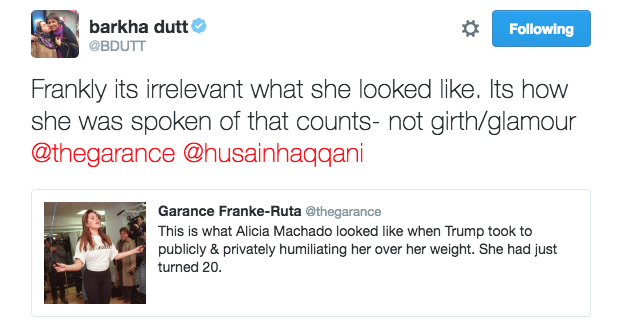 We are proud of you Sushmita!