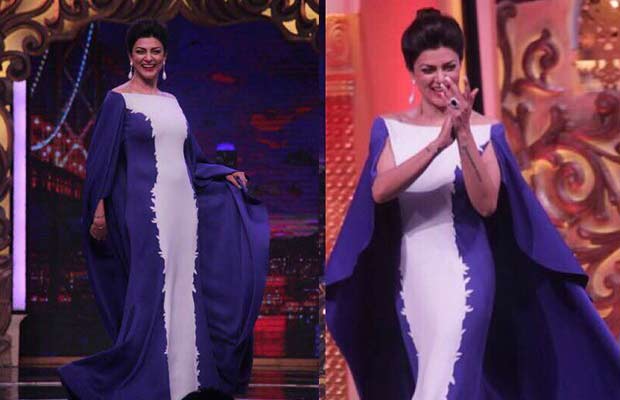 We have missed Sushmita Sen from the limelight and movies for way too long. We loved this Bengali beauty for her acting, dancing and her impeccable modelling skills. She has earned the respect of the audience and the media with her awe worthy hard work in films and her effortless work in social reforms. She has proved us in many ways what a gem of a star she is.

We have not had a glimpse of this fashionable diva in a very long time but we recently spotted her make a comeback on the ramp for Tresemme in Bangladesh. She was seen wearing a sleek red and golden gown as she walked the ramp. She was styled by none other than Daniel Bauer for the big night. The most shocking and attractive part of the evening was Sushmita’s new hairdo. She was seen sporting short hair which she hasn’t been seen in before. Looks like the glam diva is in a mood of experimenting and hence she took a shot at chopping her long hair off. We are not complaining because the look, the hair and certainly the styling was definitely suiting our diva. She walked the ramp and wooed the audience with her look; she even interacted with media personals during the show and chatted in a joyous mood.

The stylist for the evening later took to social networking site and tweeted, “Sushmita Sen closes the show in Dhaka for Tresemme Bangladesh…I even walked the ramp…what an amazing memory.” Well she certainly walks like a dream.

We hope to see more of you Sushmita as it has been long since you made an appearance or did a movie on big screen. We loved your work and it will be good to see you back!