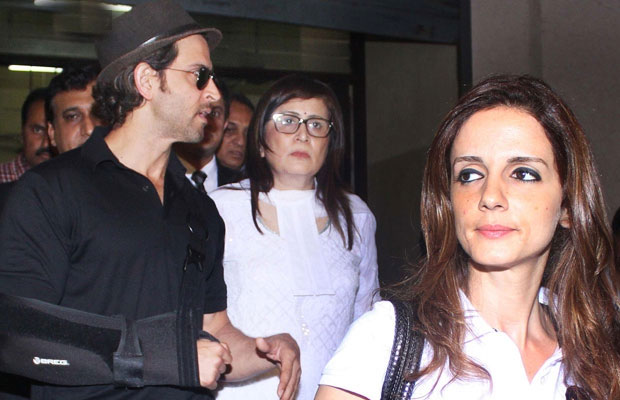 [tps_footer]Recently, rumours were doing rounds that Hrithik Roshan and his ex-wife Sussanne Khan were holidaying together in London along with their kids. Some even speculated that it is a spark of reunion between the estranged couple but that’s not the case. Sussanne Khan in an interview revealed that there is no truth to these reports and that she was not holidaying with Hrithik Roshan.

Sussanne Khan was very much surprised with how media is speculating about her life without knowing the real truth. She revealed that she was in London as she had to take her two sons from Hrithik Roshan. Hrithik happened to be in London at the same time when she was there with her girl gang.  Sonali Bendre, who was also a part of the girl gang, posted a picture of all the kids on a scooter with Hrithik, Sussanne and others seen in the background. That’s how the speculations began!

She also added that the two were having lunch together only for their kids. The proud mom stated that she would do anything for her kids and that she and Hrithik are parents first and their kids are the first priority. So the two having lunch with their kids does not mean they were holidaying together.

Well, Hrithik Roshan and Sussanne Khan have parted ways and they have always remained good friends. Moreover, it is amazing to know that how they are giving their time to get the best upbringing for their kids.[/tps_footer]