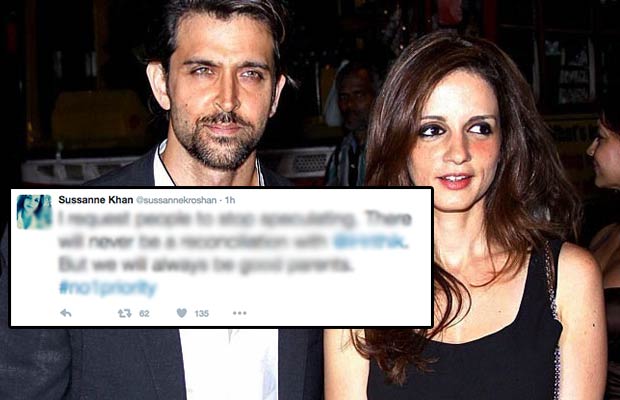 [tps_footer]After the tweet from Sussanne Khan that she stands by Hrithik as Kangana had photoshopped the controversial picture, people and media were totally shocked and pleasantly surprised at the same time. Yes, Sussanne and Hrithik never had an ugly fight in public or a pathetic divorce process that Karisma Kapoor-Sunjay Kapur went through. But, even after separating from Hrithik Roshan and facing a failed marriage, Sussanne Khan still supports him and has come out openly for the legal battle Hrithik Roshan and his legal team are fighting against Kangana Ranaut and her lawyer Rizwan Siddiquee. This sweet gesture made by Sussanne and her strong stand for Hrithik prove the real friendship these two exes still have.

But, now Sussanne Khan has tweeted something more to clarify on the speculations of Sussanne-Hrithik to get back and give another chance to their unsuccessful marriage. It’s really unfortunate to see them falling apart but till today no one knows what’s the real reason behind their separation? Both, Sussanne-Hrithik maintain a good relationship with each other and they take their kids as their priority but they just don’t get back to each other. Although, Hrithik Roshan even tried to save his marriage and even Salman Khan had asked Sussanne to give a second thought on divorcing Hrithik but nothing worked out.

So, here is the tweet in which Sussanne Khan has rubbished the speculations of getting back with Hrithik Roshan,